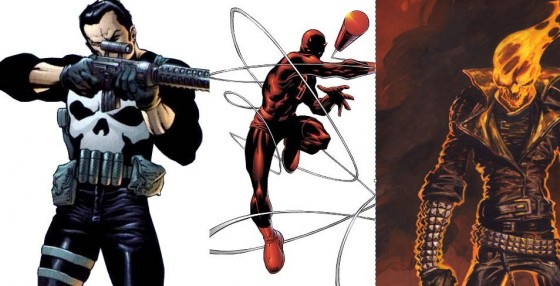 Disney has recently had several properties lapse back into the control of Marvel Studios. This should be good news, however all of the properties seem to be a little bit darker than what would seem like traditional ‘Disney/Pixar’ fare. The properties that Disney should now feel free to develop for movie as well as commercial tie-ins are Ghost Rider, Daredevil, Blade, and the Punisher.

If you were some how still holding out hope against hope that you will ever see Nick Cage as Ghost Rider, Thomas Jane as The Punisher, Ben Affleck as the Daredevil, or any good news for Wesley Snipes post-jail career; you might be in a bit of a funk. However, if you are Disney, you might not want to go farming out your darker characters just yet. As a matter of fact, the competition is providing a very good reason to use all of them in an upcoming movie.

You see, DC is actively developing a movie based on its ‘Justice League Dark’ concept. Guillermo del Toro (Hellboy) is attached to direct. Basically, Justice League Dark would take some of DC’s darker heroes like Deadman, Swamp Thing, John Constantine, and Etrigan the Demon and turn them into a super-hero team. This concept and development is actually much farther along for DC than the ‘lighter’ Justice League concept.

This would mean the DC is actively taking the lead over Disney and Marvel in bringing a dark superhero team to the theaters. Would such a super-hero team (which is mostly based on comics Marvel Knights imprint) be too dark for Disney to handle? Lets review exactly what it is Disney does… for just a moment.

Disney very literally takes nightmares as well as nightmarish stories and turns them into family friendly fare. There is not even anything in these properties that Disney has not done before. Did you lose your family violently before being forced to violently take back what was yours?

Perhaps, there was an event so scarring your youth that you grew up willing to do anything to protect those less fortunate than you?

Maybe, there is a possibility that the dual nature of your birth brings you into conflict with the darker aspects of your supernatural nature? This leads to a dark confrontation with beings who have it out for you since the moment you were born.

Maybe your damage is that you have been cursed into hideousness but are desperate to regain some form of humanity despite your nature?

All that we are saying is to attempt to keep an open mind on this one. The Marvel Characters and their background stories are certainly no worse or horrifying than Grimm Fairy Tales. Disney has mined those for literally some of its biggest hits. We are not saying that this is the route that Disney will take. We are saying that it might want to think twice before farming out these particular properties to other studios again.