Sports > Soccer > Diving is Something You Do in a Speedo

Diving is Something You Do in a Speedo

I hadn’t had a Big Mac for about two years until my ill-advised purchase of one last week. I was famished and, hey, two all beef patties, special sauce, etc., etc. What’s not to like? Why didn’t I eat these things more often? Upon finishing, I remembered exactly why: A dull ache started to swell in my not-insignificant belly and for the remainder of the day it felt like I was carrying a brick around in my stomach.

Every four years, I greet the World Cup with eager anticipation. The finest players in the world on display in the biggest tournament in sport, pubs packed with festive fans, and bandwagons overflowing with new and part-time boosters (England is in danger of losing my quadrennial support if they don’t shape up!): what’s not to like?

It was all going down great, until the inevitable brick in the stomach feeling, supplied by Daniele De Rossi (good name for a Best Actress Oscar nom, incidentally) :

Disgraceful. Baiting refs into calling a penalty is about as unsportsmanlike as it gets, yet diving is tolerated, sometimes even encouraged (I’m looking at you, Italy), in what has to be the biggest black mark in the worlds most popular game. The lengths that some of these guys go to to incur a foul seem without limit in some cases, ranging from cleverly-timed stumbles, to egregious writhing in mock pain. To make matters worse, the trainers are in on it, using their “magic spray” which will miraculously transform a near mortally-wounded player into a sprinting, tireless all-star. 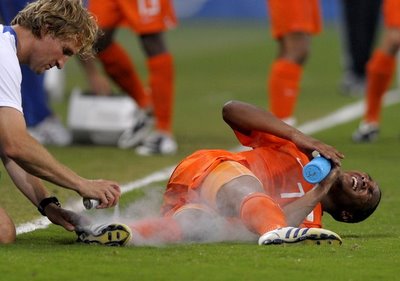 The leg was actually totally severed before spray application

The following is a great compilation to illustrate this scourge of an otherwise honorable and exciting sport (my favorite is # 4 wherein the diver is appropriately mocked by his opponent. Stepping on the offender’s hand with cleats would have been acceptable as well, IMHO):