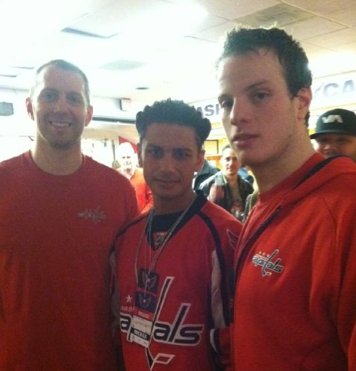 The Washington Capitals made it well known on HBO’s 24/7 that they are fans of the Jersey Shore’s DJ Pauly D. They fist-pumped after victories as his music blared over the speakers.

But it doesn’t stop with the music. Alex Ovechkin invited the reality star to the nationally televised Capitals-Blackhawks game (since Barak Obama couldn’t make it). After the 4-3 overtime victory, Pauly and his entourage made their way to the locker room, where the Caps lined up to get their photo taken with him. Ovechkin didn’t even bother getting dressed for the occasion.