Media > Television > Doctor Who – Asylum of the Daleks

Doctor Who – Asylum of the Daleks 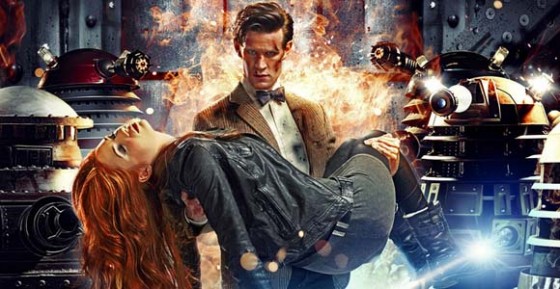 If you’re a TRUE Whovian (a Doctor Who fan to the core), then chances are you tuned in this past Saturday for episode 1 of the 7th season (since its relaunch) of Doctor Who. If, for some bizarre reason you aren’t… well, you can stop reading now and shame on you. Otherwise, keep reading and you’ll get my take on what looks to be the genius kick-off of an amazing season to come.

Let’s begin properly, shall we then? (if you say that in a British accent, it sounds way cooler.)

The Daleks. It appears the tale begins in a desolate planet overrun by those pesky robots who have plagued the good Doctor for eternity. And it’s only a matter of time before we find out that it’s Scaro: the planet on which all Daleks originate. Oh, wonderful. But fear not, for The Doctor is there… but maybe just a little against his will. A woman has called to and reached him, and it comes as quite a surprise to The Doctor because not very many people can do that. Or very many things in general, as we’re about to find out… 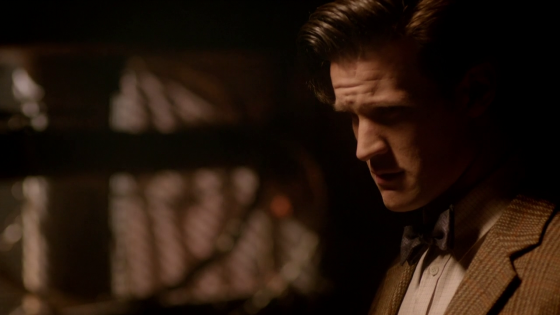 From this point on, if you haven’t seen the episode and you plan to, stop reading, for it shall be populated with a multitude of spoilers. Okay, you’ve been warned. On we go, then…

The woman shows her true ‘colors’ after being pegged by The Doctor as being a trap and not even being aware of it. The classic eye-stalk pierces through her forehead and the beam gun through her hand, and The Doctor is rendered powerless.

Oh no! The Doctor, he’s… whoa, wait a second… who’s this? Wow. It’s Jenna Louise Coleman! She’s going to be The Doctor’s new companion! But, isn’t she not supposed to be here until the Christmas Special (not that I’m complaining, mind you)? And yet, here she is and from the very second she’s on screen it becomes apparent why she was chosen: charming, funny, and just a stunning beauty. And it seems she’s been stranded… somewhere. She’s holed up in her little room doing her best to keep the malicious strangers out… strangers who sound oddly like… Daleks! Oh, and she’s been making souffles! Well, okay. 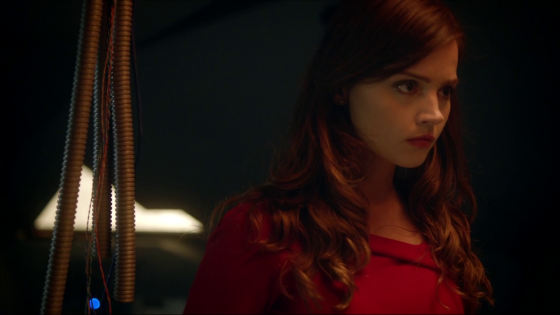 Scene change, a bit jarring as well, to fists thrusting at the screen showing tattoos of LOVE and HATE on a set of female hands… well this must be Amy! And it is! Doing her best Super-Model impression as she grouses and flirts with the photographers. Soon an assistant informs her that her husband is there (we know that’s Rory), but Amy matter-of-factly admits that she doesn’t have a husband. What?! She storms into her dressing room to find Rory sitting, melancholy, in a chair with a handful of papers. He asks her to sign and she once again, with full-on Amy-ire, asks him if it then means that they won’t be married. Oh, this is just sad! It’s meant to shock, and it does. Rory leaves in a huff, and Amy sits as her makeup assistant offers to fix her pallor (isn’t Amy always pale?), but just then, as a light bulb flickers on her mirror, Amy sees a familiar stalk erupt from the lady’s head, and she, too is stunned. And just as Rory boards the bus, the driver becomes Dalek, and Rory falls victim as well. What is going on here? 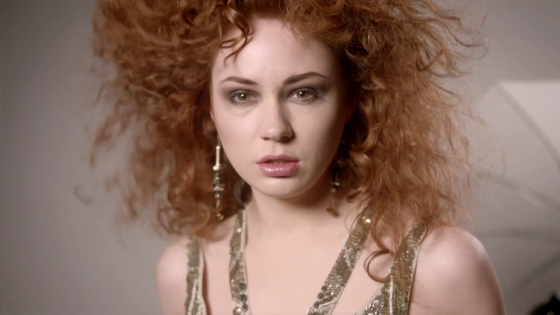 Rory comes to. He sees Amy standing in a white room and questions their situation. Amy gestures to the window and Rory sees Dalek ships assembled about. He asks about their current state of trouble, and as the grinning, unimpressed Doctor walks into the room accompanied by two Daleks, he replies that it is, indeed, quite a lot. The floor rises and the trio are brought before the full council of the Daleks. This scene features more Daleks in one place than any other in Doctor Who history and it is damn impressive. I don’t know the full count but several hundred is a good assumption. The Doctor raises his arms and prepares for extermination as he admits that the Daleks have finally got him. But wait… one Dalek voice speaks out, and asks The Doctor… for help. 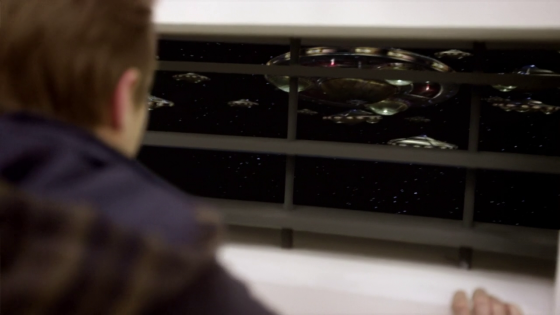 The Doctor grins, and admits that this is indeed something new. It seems that the Daleks have a planet called The Asylum where all the Daleks who no longer serve a functioning purpose, or who have gone completely out of whack to the point where they cannot be controlled, go to slowly break down. The Doctor discovers that they don’t kill their own because the Daleks believe evil that complete is beautiful, and to do so would be against their own design. They even say for that specific reason is quite possibly why the Daleks have never been able to kill The Doctor: because to them, he is the divine evil. Oddly appropriate, since he has managed to thwart them at every turn and never ceases to destroy them. This is the time The Doctor finds out that he has been chosen to head down to the Asylum and turn off the planet’s force field so it can be purged from space by the Dalek Parliament. But wait… is that… Bizet’s Carmen? 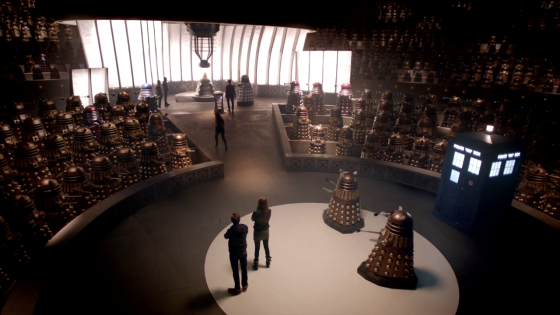 It is, and The Doctor says that it’s him on the triangle, but he’s been overshadowed by the rest of the instruments. Funny. As he begins speaking, we suddenly hear the voice of the woman who’s been trapped, and it turns out she’s trapped in the core of the Asylum! Her name is Oswin and she’s been down there for a year since her ship crashed. A year? On the Dalek Asylum? Doing what? Making souffles, she admits, and The Doctor is not only amused but stunned as to how she’s managed to find… milk. Hm… The Daleks open a beam to the Asylum, the trio are given wrist bands to keep from being ‘assimilated’, and they’re kicked through the hole right down to the Dalek dumping ground. Geronimo! 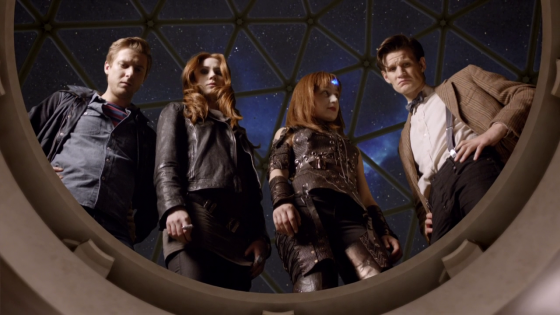 Amy lays still on the snowy ground (and as an aside, as adorable as Karen Gillan is, she looks a bit odd on her back… makes her have even less of a chin than she already does. Maybe it’s just me…), a man appears over her, and she’s startled awake. She ignores the stranger and begins searching for Rory and The Doctor. In another patch of snow, an eye-stalk pokes through the surface in a very nice homage to The Empire Strikes Back. It pops out again right beside The Doctor, and he realizes -after a quick blast of Carmen- that it’s Oswin! He asks her how she’s doing that since it’s Dalek technology, and she says that it’s quite easy to hack. The Doctor, taken aback a bit, says that it isn’t (which just goes to show that he very often has trouble messing with their Dalek minds even with his Sonic Screwdriver). She tells him that she’s underground and asks if they’re going to rescue her, but she breaks up, and Amy arrives. They can’t spot Rory, but the stranger says that another beam hit a few yards away. They find a chasm that leads to the center of the Asylum, and this is where we find Rory, lying on solid ground under the surface, surrounded by Daleks!

Of the creepiest Doctor Who creatures over the past several years, the top two have got to be The Weeping Angels and The Vashta Nerada… but right up there are the new and exciting Zombie Daleks. What? You see, The Doctor and Amy follow the stranger to his ship to acquire something with which to ascend into the chasm to save Rory. He says he’s crashed two days ago, on the exact same ship Oswin crashed a year ago… uh oh. The man figures out that he is actually dead, and the minute he does so, becomes Dalek. The Doctor and Amy chase him into a room and lock the door, and The Doctor realizes that he wasn’t wearing a wrist band and thus has been turned, via the Dalek Nano-Cloud, into one. This also happens to work on organics both living and dead… and the rest of the man’s crew has been dead an awfully long time. They too begin to rise, and it’s a quartet of Zombie Daleks! Nice twist on both genres, I might add! Well, The Doctor springs into action, and frees himself and Amy as they move into another corridor, leaving the Zombies behind. But all is not well… as they fled, one grabbed Amy’s arm and removed her wrist band. Not good… 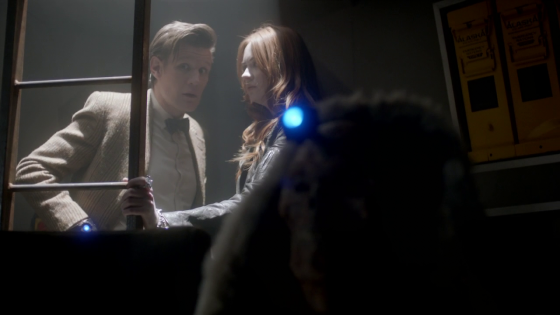 Alright kids, that’s enough writing about it. If you’ve read this far and you’ve liked it, go and watch the episode! You know the BBC will play the heck out of it this week, and it’ll of course run before the new episode Saturday. Or do what I did: pirate a copy! It’s illegal and fun for the whole family! Do yourself a favor and discover Doctor Who. It’s the best in Sci-Fi on right now, and the stories are intriguing and genuinely fascinating. Be a Whovian! It’s good for the soul!