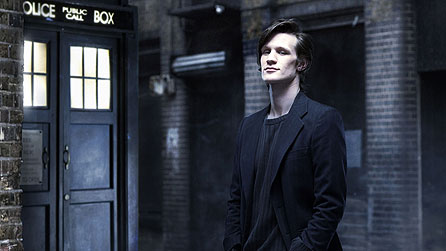 If you’re a fan of Doctor Who (and let’s be honest, you are not cool if you aren’t) then you need to mark April 17th on your calendar and to-do lists because it marks the official start date of the brand new Doctor! Yes, kids, after David Tennant gracefully bowed out after the “End of Time” conclusion, the new face of the time traveling man from Galifrey is Matt Smith. Who?

Well, on the other side of the pond he is a much bigger face than here in the States, but that’s neither here nor there. The point is, he’s a newer, dare I say ‘hipper’ Doctor wielding not only a gun (say what?) but a far more gung-ho, snarky, ass-kicking attitude. Yes, this is something of a bittersweet change since Tennant’s Doctor had become easily one of the most popular, but, as we can glean from this clip, it might just be okay. So get your Sonic Screwdrivers ready and glue your eyes to BBC America on April 17th!