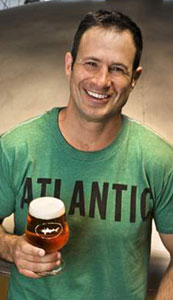 For American Craft Beer Week, we’re profiling a different Craft Brewery each day this week, and today we’re leading off with Dogfish Head. Not only is Dogfish Head nationally known (and pretty damn good) but they are semi-local to our Gunaxin headquarters and have a Brewpub in Rehoboth, Delaware where I like to spend time during the summer.

Dogfish Head Brewery is a brewing company based in Milton, Delaware founded by Sam Calagione. It opened in 1995 and produces 75,000 barrels of beer annually. Dogfish Head has been a rapidly growing brewery – it grew nearly 400% in between 2003 and 2006.

The brewery was featured prominently in the documentary Beer Wars, and is the subject of the Discovery Channel series Brew Masters, which premiered Sunday, November 21, 2010. The brewery takes its name from Dogfish Head, Maine where founder Sam Calagione spent summers as a child. (Wikipedia)

We’ve reviewed a few Dogfish Head beers over the years, and you can find links to them below :

Dogfish Head craft brews have also found their way onto several of our beer lists, and you can find links to those below :

…and finally, we actually interviewed Brewmaster Sam Calagione on episode #43 of our Podcast in relation to his series, Brew Masters on Discovery.