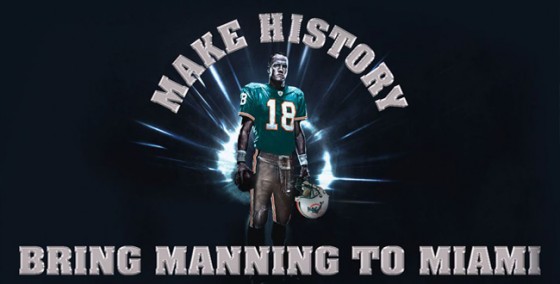 A group of eager beaver Dolphins fans have started a website in hopes of gathering support to sign (or trade for, I guess) damaged goods quarterback Peyton Manning, who last I checked was still a Colt, and more importantly had yet to be medically cleared to resume playing. These industrious Fin fanatics even went so far as to mount a billboard along I-95 that looks like this: 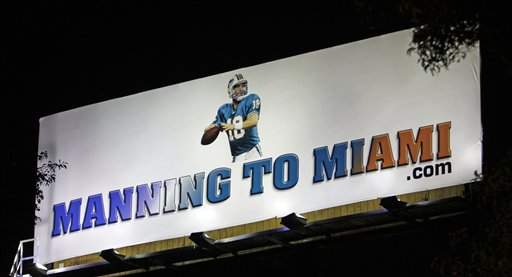 WHOA. Might want to slow your roll there, Floridians. Hey, I get it. The prospect of another season with the likes of Chad Henne or Matt Moore under center is a living nightmare, but ignoring the fact that Manning has a dead arm in order to feed delusions of grandeur isn’t going to fix what’s wrong in Miami.

Even if all the cards fell into place and Peyton relocated to South Florida, his best years are behind him. He turns 36 in March, hasn’t thrown a pass at full velocity since January 2011, and has played in one offensive system his entire career.

The last quarterback to win a Super Bowl past the age of 36 was John Elway in 1999. He was 38. The only other signal-caller to win the Big Game at that age was Johnny Unitas (37) in Super Bowl V.

And as much as we’d all like to believe a quarterback is an all-encompassing elixir that will magically cure a franchise’s ailments, it’s not so simple. Manning won’t fix a leaky secondary or a non-existent pass rush or a running game relying on the unreliable Reggie Bush.

Oh yeah, did I mention the FUSED NECK AND NERVE DAMAGE? Besides that, he’d be a great fit in Miami.