Don Cherry is a Jackass 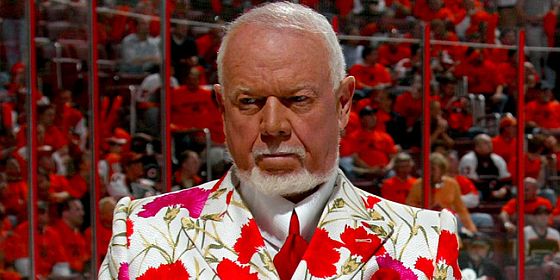 Don Cherry, the opinionated and poorly dressed Hockey Night in Canada host, has weighed in on the NHL lockout, and it isn’t pretty. Cherry, apparently hurting for money, decries the players for bad-mouthing NHL commissioner Gary Bettman, insisting that it is the players, not the owner (who locked out the players) who are making it personal.

Cherry fluctuates between telling the players that they need to shut up and calling them gutless for not calling out the owners, puts the blame on the stalled talks squarely on the players. Cherry also reminds us, repeatedly, that he isn’t getting paid either during the lockout, making his opinion a bit less than unbiased.

Our favorite moment in his rant, however, didn’t involve the players but instead demonstrated Cherry’s ignorance about the negotiations. He ask “do you not think if 20 owners went to Bettman now and said “the lockout ends now” it would end? It would end for sure?” apparently unaware that it only takes eight teams to veto any new CBA deal.