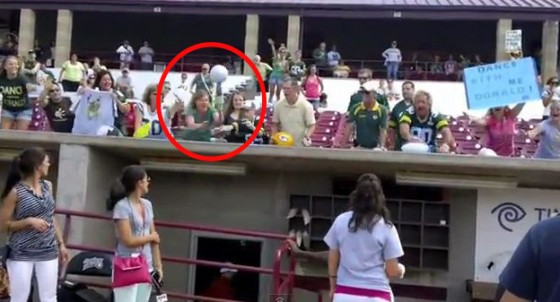 The fat @#$% in the green shirt circled in red should be beaten with her stupid homemade mirror ball trophy from Dancing With the Stars. Why? Because she thought it perfectly fine to steal one of Donald Driver’s shoes from a little Packers fan at a charity softball game in Wisconsin. This waste of chromosomes shoved the lad aside as if he were trying to grab her block of cheddar cheese. I’d like to believe she did the right thing and handed the cleat to the boy later on, but it seems highly unlikely.