Media > Music > Donna Summer vs. Kool and the Gang

Donna Summer vs. Kool and the Gang 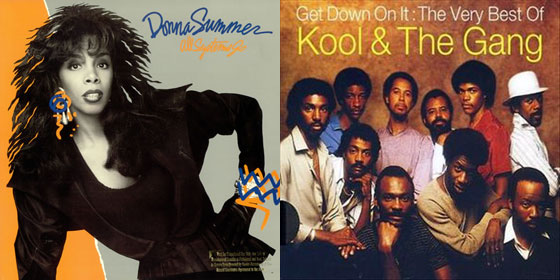 With so many music videos out saturating television channels worldwide, it’s not exactly difficult to find a couple that are similar enough to be placed in a death-match against one another. In this case, we’ve taken two videos of fairly popular classic artists that both happen to make some very “unique” decisions in terms of visual effects and set them up for Gunaxin’s version of “Hell in a Cell.”

Allow us to present “All Systems Go” from Donna Summer vs. “Get Down On It” from Kool and the Gang. Which one of these two atrocities will reign supreme as the most seizure-inducing music video of all time? You’ll soon find out!

Honestly though, you probably won’t be able to handle these videos in their actual full-motion splendor, so instead of forcing you to watch them both back to back, we’re going to present them in a series of pictures for you to marvel at (you can also watch them, of course, if you’ve got eyes of steel… or you’re blind).

Not so Kool after all…

Have you ever dreamt of jumping face-first into a kaleidoscope (Lucy-in-the-Sky-with-Diamonds-style) and becoming entangled in the visual puke that you’d inevitably find yourself surrounded by? No? Well, then clearly you’re not “Kool” or one of the many fellows that comprise his “gang” (seriously if three’s a crowd, then 26 is a full-blown riot!).

The first half of this video is blurred by enough visual effects to make two additional hours of “Avatar.” Even for those of us who actually LIKE this song, it’s an arduous sight to behold. As the sounds build into the song and the sheer funkiness of the music begins to grab hold of you, the colors and motions, too, begin to build until they border on seasickness extremes.

If you thought the first half of this video was bad, then you’ll most likely find the second half to be completely unbearable. By “unbearable” we really mean “exactly the same” as they don’t change a single thing. The slow-oozing, birth of a jellyfish effects you’ve been hypnotized with for the last two minutes continue their relentless battering of your senses. Assuming you’re too stunned by the rainbow-flavored ectoplasm that’s swirling before you to turn away, you will inevitably be rendered blind before the song fades, or rather, you’ll acquire the “eyes of steel” we mentioned before.

The Stare-down with Donna

For 50 bucks, would you put on a dress and a biker jacket and stare lustily into a camera for a minute? If your answer is yes, you’re probably just Donna Summer answering this dumb question incognito.

To say this first part of the video is a little off-putting is a fairly mild understatement; it’s utterly baffling. After a good twenty seconds, you start to wonder if you’ve unwittingly been placed in some sort of epic staring match with Donna. By the looks of things, the winner gets the loser’s soul.

The rest of the video is about what you’d expect of high school students (flunking ones) armed with the camera lenses of their cell phones, Microsoft movie maker and far too much free time on their hands. Donna works it for the camera; superimposed on at least forty different vaguely scientific/space-aged backgrounds. She does a series of awkward (at best) dance moves as calculator screens compute endless amount of data around her before being swallowed by large images of black holes and white dwarves (we’re still talking about space here).

Magnified shots of her head float at her sides at intervals throughout the video and the images gradually get more and more bizarre until, finally, it ends and leaves you as you were when it first came on (minus your soul).

And the winner is…

Although, Donna’s video was clearly a disturbing example of improper visual effect use through and through, the award for most insanely atrocious effects of any music video has to go to Kool and the Gang’s “Get Down On It.”

They win; in part, because the contrast of such an absurd video with a song that was such a hit in its time is so great, but also because they chose to take a single effect to and beyond its conceivable limits for the ENTIRE VIDEO! That takes cojones… and acid. Ok, mostly acid.

Here they both are, in all their glory