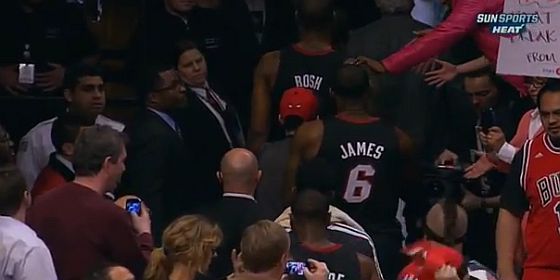 LeBron James has done a lot to rebuild his image after the disastrous “Decision” and his move to Miami. Winning his first title helped, and he followed it with a ridiculous appearance in the Heats’ Harlem Shake video this winter. LeBron has come off this season as likable, approachable and even a bit goofy, endearing himself to fans all over again.

That doesn’t mean, however, that you should try to mess with his headband. If there is one thing that James is going to be protective of, it’s the wide headband that covers up his receding hairline during games. One Bulls fan, for some unknown reason, decided to violate that rule, and make a swipe for the band last night. As the Heat were walking off the court following the end of their winning streak a fan made a grab for the headband, and earning a stern staredown from LeBron in the process.