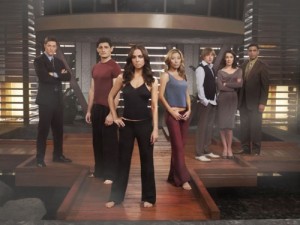 Eliza Dushku stars in Joss Whedon’s latest show, Dollhouse, which begins airing on Friday (February 13, 2009) on Fox. Dollhouse is Whedon’s 4th show (not counting Dr. Horrible’s Sing-Along Blog) after Buffy the Vampire Slayer, Angel and Firefly but hopefully it won’t be mishandled the way Fox mishandled Firefly (which was a great show and was also turned into a great movie Serenity).

In Dollhouse, Eliza Dushku plays a young woman called Echo, a member of a group of people known as “Actives” or “Dolls.” The Dolls have had their personalities wiped clean so they can be imprinted with any number of new personas, including memory, muscle memory, skills, and language, for different assignments. They’re then hired out for particular jobs, crimes, fantasies, and occasional good deeds. On missions, Actives are monitored internally (and remotely) by Handlers. In between tasks, they are mind-wiped into a child-like state and live in a futuristic dormitory/laboratory, a hidden facility nicknamed “The Dollhouse”. The story follows Echo, who begins, in her mind-wiped state, to become self-aware.

Beyond Dushku’s character, the show will also revolve around the people who run the mysterious “Dollhouse” and two other “Dolls”, Victor and Sierra, who are friendly with Echo (the names are simply letters in the phonetic alphabet). Although the Actives are ostensibly volunteers, the operation is highly illegal and under constant threat on one end from Paul Ballard, a determined federal agent who has heard a rumor about the Dolls, and an insane rogue Active on the other.

The Dollhouse looks like it’s filled with beautiful women and a few Alumni from Whedon’s other shows, including Eliza Dushku who played Faith on Buffy and Angel, and Amy Acker who played Fred on Angel. Check out all the cast members below: