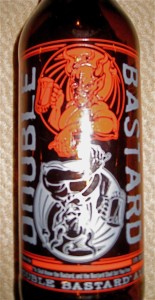 Information: This is a lacerative muther of a beer. The evil big brother of Arrogant Bastard Ale. It is strongly suggested you stay far, far away from this beer. Those foolish enough to venture close enough to taste will experience a punishingly unforgiving assault on the palate. ’Course there’s always the masochists…11.2 APV

Arrogant Bastard is a well known IPA-style beer that can, and will, knock your socks right off. So it stands to reason that a Double Bastard will not only knock them off, but also lose them in the laundry for you. The bottle’s label has a Ying-Yang appeal to it where you have the Stone Arrogant Bastard ‘devil’ in red on the top and white just beneath. Creepy. Okay, let’s crack the crown on this guy.

A rich crown on a dark amber pour offers up grassy aromas and a melange of of nuttiness and an undertone of rich sweetness. The head remains creamy and rather thick, only dissipating to a quarter-inch crown. When not stirred there is an obvious nose of crisp hops and malts

The taste is heavy with caramel-laden bitterness inherent to the throaty hops. This ale has a whole lot going on behind the curtains like the understudies and extras in a play. There is a hidden fruity note reminiscent of raisins and even apples. The sweetness is no doubt from the roasted malts, but it explodes with toffees and even salty taffies. It has a subtle layer of yeastiness that lends itself especially well to the bread-like characteristics it’s hiding under the main attraction. It’s an amazingly eclectic collection of mysterious flavors and different mouth notes that really only make themselves known after repeated swallows. There is just so much going on here that matching it with anything other than a big plate of nachos is just simply a crime.

Rating: * * * *
This Bastard comes at you with everything but the kitchen sink.