Drink Your Beer in Style

There comes a time in every budding beer drinker’s life when one sets aside the desire to jab a hole in a can of Natty Bo with a car key so one can swim down that less than premium brew as quickly as humanly possible. Yes, eventually, we all must mature and find new and exciting ways to wedge the top off a bottle using a lighter or the corner of a buddy’s counter-top. But even then, though we’ve advanced that much further up the beer drinker’s ladder, there is still room for improvement. Soon you might want to join the slightly more sophisticated society ad use a proper glass, you knuckle-dragging cave man.

Ah, but which glass to use? Well, let’s take a stroll together down ‘Beer Glass’ lane shall we? Soon we’ll know. Soon, grasshopper…

Find yourself any decent beer film (or travel to Germany and you’re likely to see lots of folks sipping their elixir out of a gigantic mug with a lid called a stein. Funny enough, if you do see this, chances are it’s a ploy since drinking out of such just doesn’t happen as often as it once did when steins (from German Steingut for stoneware and Steinzeug-Krug for stoneware-mug) with lids were used to prevent transfer of, of all things, the Plague. Awesome. Anyway, use these for fun.

Let’s assume for a second that you are into Lambics (a very distinctive type of beer brewed only in the Pajottenland region of Belgium (southwest of Brussels) and in Brussels itself at the Cantillon Brewery and museum. Some tend toward fruitiness.) and other fruity, Champagne-style beers, well then, a flute is for you. Flutes a very familiar to anyone who’s toasted in a given situation and have the same familiar ‘fluted’ shape as such. This type of glass adds to the release of carbonation and thereby the release of effervescing scents.

The beer glass known the world over from London to Amsterdam… though a little less so here in the good old 50, is the Pint Glass. A typical Pint Glass is measured as being an Imperial Pint which actually holds 1.2 US Pints (since we love to be different) and is 568 ml. Pint glasses come in a variety of shapes, the four major ones include nonic, conical, jug, and flared top and are generally used when being served heavier brews like stouts, porters, and dark lagers. This is the default glass I use for my reviews and it acts very nicely as a head producer, a scent releaser, and a taste enhancer.

Got a big ol’ sipping beer? Ya know, something like a bock or a really heavy and strong Bourbon-Cask-aged ale? Well, then I suggest something like a goblet or a barrel-shaped chalice in which to serve it. These big glasses serve to really open up the strength and heartiness of the beer you’re striving to get every drop of flavor out of. In fact, Sam Adams has come up with a glass in this description that has etching on the bottom to allow for maximum bubble formation and therefore a nicer, odoriferous head.

One of my new personal favorites in the ‘beer’ category is the Barley Wine (strong, fruity but not obtrusively so and a tint of deep toffee and rhythmic caramels) . There are a ton of different scents and aromatics playing around on this field and the only way to really get them to play nice together is to get them to come at you a little at a time. And it helps to use a glass like a snifter which is more known for its assistance in brandies and cognacs. This type of glass aids in the release of separate aromas and specific noses inherent to barley wines and the like.

Tulip glasses are a bit less distinct since just about any glass with a rim more flared than its body can be technically referred to as tulip. In fact, many of the better pint glasses have that known bulbous body with the opened head (very tulip-like, oddly) to allow for much more pronounced head production. These glasses are very useful for beers that deserve to be released with a nice, rich crown like Scottish and Belgian Ales.

7) The Stange and Becher

Weird names, right? Well they’re Germanic, as is the standard for many of the more useful and sought-after beer glass styles. Many are most familiar with the stange which looks like a tall, slender mug. This shape allows for the brew itself to retain much of its bottled flavor and aroma without giving up a ton to the head, which, though pronounced, still forces less to the surface over all. This particular style is reserved most often for Kölsch (a clear beer with a bright straw-yellow hue, and it has a prominent, but not extreme, hoppiness) and altbier (a beer that refers to the pre-lager brewing method of using a warm top-fermenting yeast like British pale ales.) 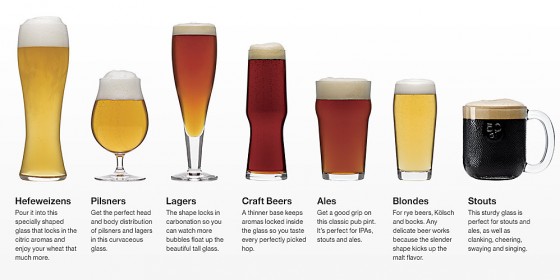 There. Now ya know. So stop sitting around with a warming Coors between your legs and do yourself a major service: get a glass. They’re relatively cheap and, if you’re lucky, you can get a boxed set that includes a few awesome beers and a kick ass glass all in one set! Seek em out, you’ll be glad you did.