Somewhere in southern Minnesota is a town called Kasota. In that town is a hidden gem called Drive A Tank. It’s easy to remember the location because the city and state rhyme, rolling off the tongue. Once there, though, the experience itself requires no tricks to recall.

Owned and operated by Tony Borglum, Drive A Tank is just what its name implies: a place to drive tanks. Military machines of mechanized mayhem involving tracked wheels, huge cannons, and turrets. When we arrived, there was a garage full of them. Nine tanks in all, plus several Humvees, trucks, and armored personnel carriers. 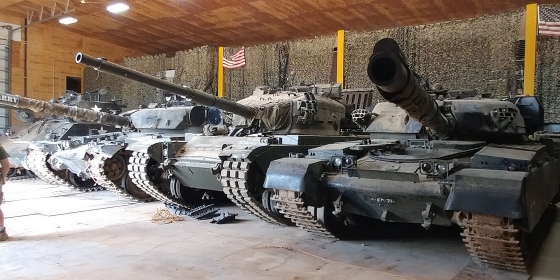 After a safety briefing, a quick walk-around to become familiar with the machine, and some rochambeau to see who got to drive first, we were in our first tank. An Abbot FV433 SPG. 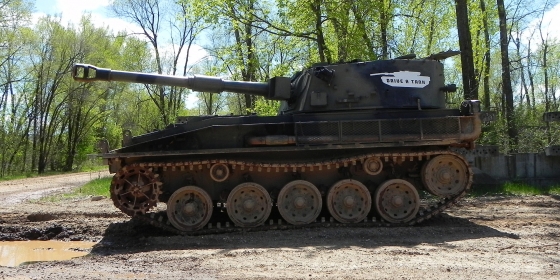 The Abbot is actually a self-propelled gun, but not calling it a “tank” is mincing words. It’s a huge 105mm cannon on a turret and tracks, propelled by a big diesel engine and weighing about 16 tons. What more do you want in a tank?

The FV433 entered service with the British military in 1965 and was used for about three decades. It was designed to be operated by a crew of four with a chase vehicle carrying more ammunition. The driver’s seat is up front and offset to the right, the commander atop the big gun, and the ammunition handler and gunner are down inside the beast’s belly. 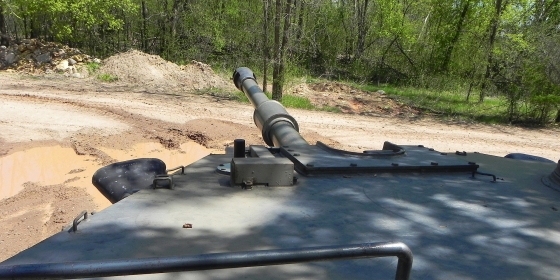 Driving a tank is nothing like a car, motorcycle, or even a semi-truck. I’ve done all three. A tank isn’t like construction machinery either, though it is somewhat similar to earth movers in terms of understanding its bulk and basic steering controls. A tank is heavier, produces more power, and lays a lot more tread than any skidsteer. Unlike a bulldozer, which may be the most similar to a tank, visibility from a tank is far lower. Especially with hatches down for full protection during combat. 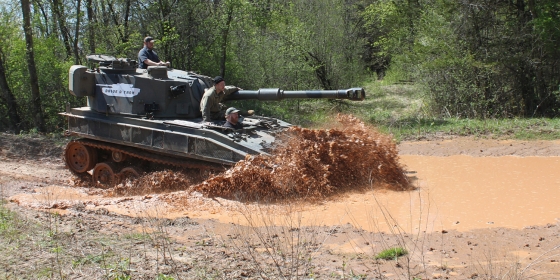 The Abbot was not particularly nimble or fast-paced, with a top speed around 29 mph and a muscular, but slow turn. Still, as an introduction to tankery, it was a great choice. 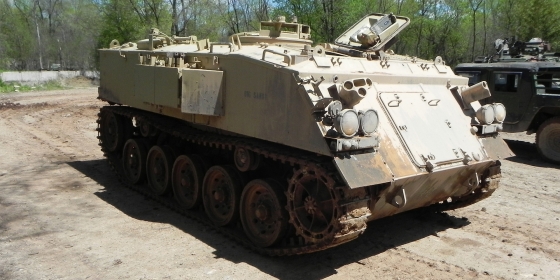 The small armored personnel carrier that was up next was a lot sportier by comparison. Like the FC433 we’d just driven, the FV432 APC is a British military machine that entered service in the 1960s and it remains in use today. Also like the Abbot, the APC is driven with a foot-controlled throttle and two levers for turning. 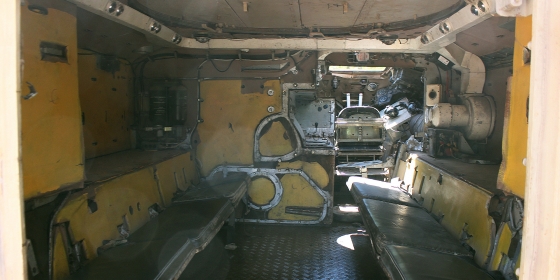 In the little APC (little is quite relative here, as the FV432 is the size of a small school bus), there is a lot of throttle response and steering, though it requires muscle, is abrupt. This little machine is made to be fairly fast and agile as its job is to carry personnel and gear into battle as safely and quickly as possible.

The driver sits up front and enters through a top-opening hatch. The vehicle commander is directly behind the driver and has a separate hatch. Two rows of benches in the square, enclosed rear can accommodate up to 10 soldiers and their gear. Those benches can be folded up to make for a flat cargo floor for supplies as well. Soldiers enter the APC from a rear hatch and gear or supplies can be craned in through a roof hatch. 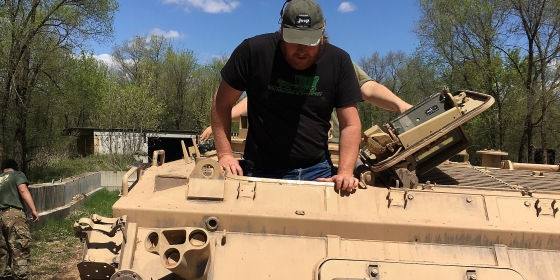 Like the Abbot we’d driven before, I immediately noticed that tall men with broad shoulders and big feet are not what tank designers seem to consider as the ideal man for piloting their machines. I barely fit into the APC and had been similarly cramped in the Abbot.

Luckily, a main line battle tank and an American machine were up next. 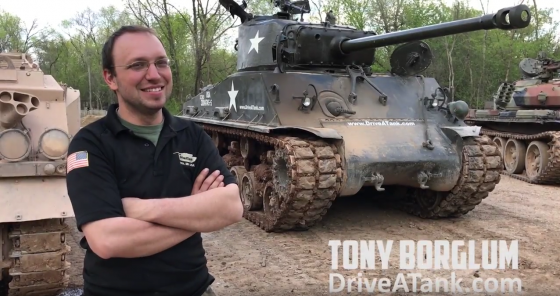 As we ate lunch in preparation for car crushing and WWII action, I realized that Tony employs quite a crew of people at Drive A Tank. Tony himself is a smart guy with a head for business and hands-on capability with large machines. He grew up around mining and excavating machinery. In his employ are other heavy machine operators, mechanics, and former military personnel.

The Drive A Tank HQ building is a large warehouse-style storefront housing all of those tanks plus a gun range, a sizeable lunch and meeting room, a conference room for safety and historical briefings, and storage for a huge amount of spare parts and gear. The entire building is decorated with military hardware from any period of the modern era, with decommissioned bazookas, bombs, mortars, and machine guns lining the walls and floorboards. The building crackles with small arms fire from the pistol range and will soon have the retort of rifles and more once work on the rifle range is complete. 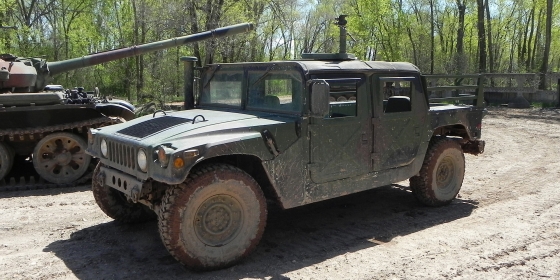 Outbuildings and parking areas around that main building house APCs, Humvees, trucks, and a lot more. A couple of rows of doomed crusher cars await their fate behind a shed containing a row of Humvees and a Kaiser Jeep truck.

Speaking of cars to crush.. 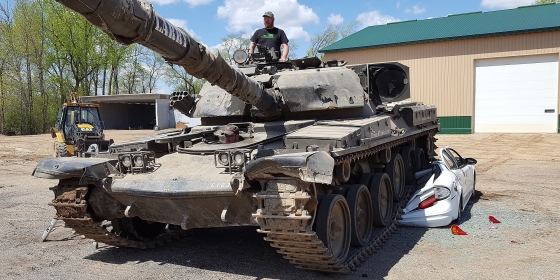 Another 1960s creation, the Chieftain was the main battle tank for the United Kingdom for a couple of decades and as the country’s primary Cold War armored deterrent. The FV4201 weighs about fifty tons, carries a 120mm main gun, and measures over 24.5 feet in length. Its armor plating is up to 7.7 inches thick and it stands like Goliath at about nine and a half feet. 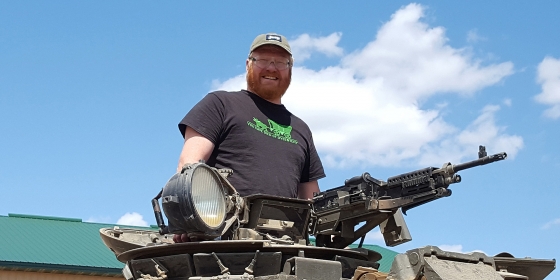 The FV4201 Chieftain is powered by a huge 19-liter multi-fuel engine that turns tracks which run the tank’s length. The driver sits front and center ahead of the turret and the Chieftain has a top speed of about 30 mph. There aren’t a lot of things that will slow this tank down or cause the driver to worry about the vehicle’s safety. Other vehicles.. Well, they’re probably going to get flattened. 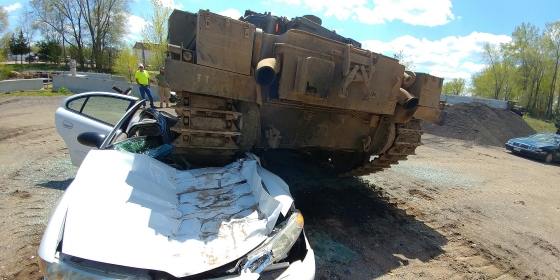 As did a Cadillac, a Ford Pinto Wagon, and an Oldsmobile by the time we were through. These cars were meant for the crusher anyway, but the big Chieftain made sure they were thoroughly mushed as only 50 tons of tracked weight can do.

After the Chieftain came some World War II history as we climbed into what is likely the most easily recognizable tank of that war, a Sherman. 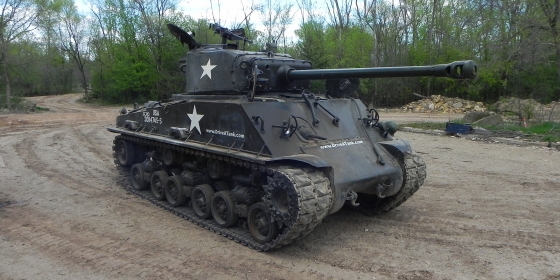 The Sherman tank is the machine that will go down in history as the most well-known symbol of the European conflict during WWII. Hailed by General George S. Patton as the greatest mechanized cavalry machine in history, the Sherman had several variants throughout the war. Our model of the Sherman M4 was the A2, which meant it’s diesel-powered through a General Motors 6046 engine. The E8 means it’s got special wide track spring suspension fittings and a 76mm main gun.

We shortened all of that to “F ya, this is awesome!” Because it was.

Unlike the other tanks we’d driven that day, the Sherman has a manual transmission and a larger, more spacious driver’s cockpit. American sized, as it were. It drives in a way that’s similar to the other tanks in that a floor throttle controls speed and a couple of levers control turning and braking. It also features a prominent engine cut-off knob, to shut things down in an emergency, and a small gear handle for shifting gears. The gear knob is about the size of what you’d find in a small car, really, but it controls some powerful gearing that allows the Sherman to really fly at up to about 25 mph. That doesn’t sound fast until you’re doing that while sitting in front of a tank that’s capable of knocking down trees and ignoring most obstacles in its path. Then it becomes a bit of responsibility. 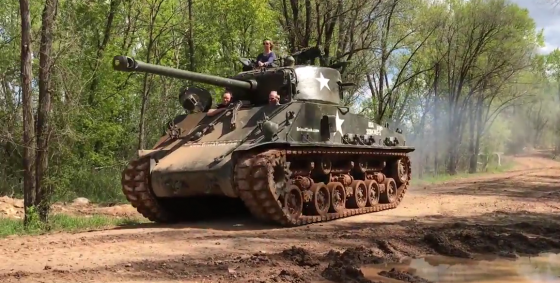 With that sword of Damocles hanging over my head, I treated the Sherman with the respect it deserves. And it paid me back with a hell of a good time as we squealed through the wilderness of Minnesota and enjoyed the cacophony that is heavy war machinery.

Describing what it’s like to be a part of a piece of history like this tank is difficult. While fellow journalist Tim Esterdahl was driving, I took the chance up top of the M4 Sherman to root around in the belly of the beast and see what it was like for those men who occupied it during their enlistment in World War 2. To imagine that up to five men would be crammed into that tank at any given time was amazing, given the amount of space available. The replica machine pistols and other gear throughout the Sherman’s interior gave an idea of what the quarters were like as we jounced along the trail. 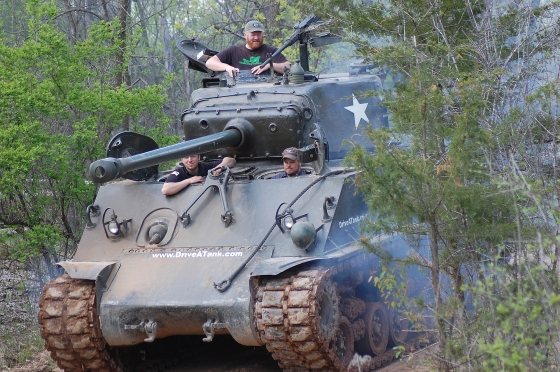 The tiny porthole view of the gunner’s sight and the slit above and to its right that gave the gunner a wider field of view was telling as to the type of claustrophobia one might feel while bullets clanged from the big tank and rounds exploded around the Sherman as it charged forward into battle. The knowledge that any single round from a German Panzer could turn the muscular little Sherman into a pile of scrap metal must have been nerve wracking.

Back into the air as I took the commander’s position and felt the jerk and bump as Tim piloted the Sherman through the woods, my mind cleared of thoughts of war and returned to the fun that is the experience of driving a tank. I made my best General Patton pose and grinned as the Sherman M4A2E8 jounced towards the rally point where we’d be parking and once again talking to the Drive A Tank experts about these glorious machines. 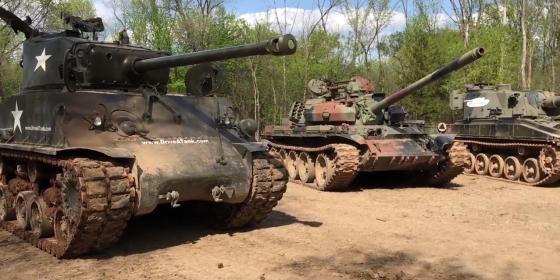 If you’ve ever wondered what it’s like to drive a tank and have an itching to learn a lot about them in the process, then Tony and his crew are your men. Packages start at $299 and can include a lot of tank driving, a lot of historical background, or just a fun car crush and some photo ops. Head over to DriveATank.com for more information and to get in touch with them about setting up your own awesome adventure.