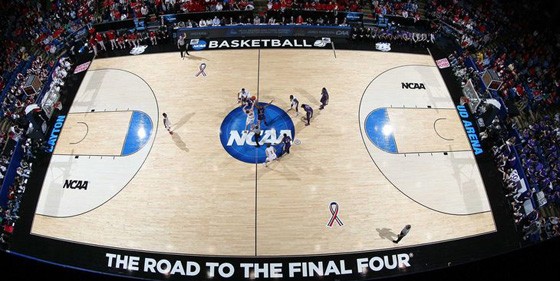 Editor’s Note : This required extensive editing as you might expect. Enjoy.

To start my Drunken 2015 NCAA Tournament Bracket, I decided to remain sober. No alcohol involved. Just a simple coke in a can while I brainstorm my picks for the 2015 NCAA Tournament which began tonight with the first two play-in games that nobody cares about. As I begin the process of choosing my winners, one thing I wanted to look at was their uniforms. It has been rumored that women who know little to nothing about the teams playing have the best brackets. So why not take that idea and apply it to my picks?

Just so you know, Jack Daniels is the drink of choice tonight as we do this thing. For every upset I pick, a shot of whiskey will go along with it. The order of the picks will go MidWest, West, East, and then the South. So it begins… 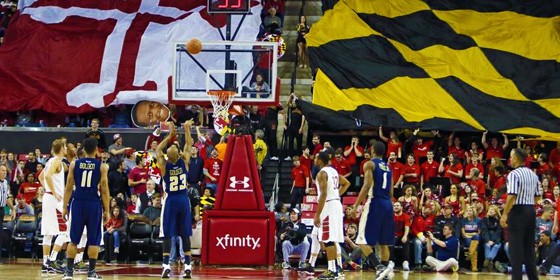 As I begin, I notice that my fiance, also apparently my sponsor by the amount of Jack Daniels in the glass, is going to be pouring my shots tonight. This Region is as easy as Apple Pie because it features the Kentucky Wildcats, America’s best team. That, and I’m still sober.

Kentucky easily beats up Cincy, Maryland rights the wrongs and beats Buffalo, Texas continues to hit big shots and upsets Notre Dame (Shot #3, Uh-oh. Whiskey was a bad idea, a bathroom break is going to be needed in about three more upsets), Wichita State shocks the world and takes down Kansas (Shot #4, this is the shot I was waiting for all day just to measure my NCAA tolerance. Nope, not that tolerant)

Excuse me a moment…

Now that I have returned from my bathroom break, I recall why drinking in college and writing a term paper don’t mix.

Anyways, we have Kentucky over Maryland and then Wichita State over Texas. Maybe taking Wichita State this far is a bad idea being as it is hard as hell to spell that damn name already, let alone with alcohol in my system. I might not make it out this region. 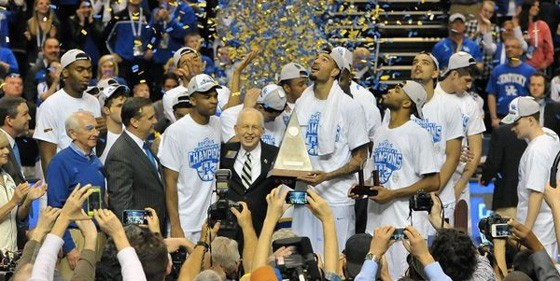 Kentucky. I’m not drunk yet. 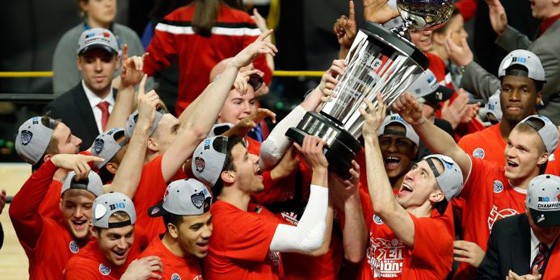 How is Wisconsin the #1 seed in the West Region? They are like the total opposite of a West Coast team, am I right? Cornhuskers, wait that is Nebraska. Hold on a second, let me Google them. Oh yes, the Badgers of Wisconsin. A defense built around defending the Alamo, aka the goal. These guys piss me off because they are so fundamentally strong, it hurts.

I think I got smarter for this region and tried to go with fewer upsets since the Whiskey has found a home in my upper stomach area. It is almost like having to watch Lebron James play the school of the blind, it is going to be fun for awhile but in the end someone will get hurt. In this case, my throat.

Wisconsin beats down Coastal Carolina, Oregon wears glow in the dark uniforms but forget that the game is played indoors with lights yet the still beat Oklahoma St. (They celebrate by running outside in the night playing hide and seek), Arkansas over Wofford, North Carolina beats Harvard in basketball but loses in the spelling bee held afterwards, BYU upsets Xavier (Shot #5), Baylor almost loses to Georgia State, Ohio State upsets VCU because a Buckeye is much cooler than a whatever the VCU mascot is (Shot #6), Arizona over Texas Southern. I thinky I mighty be drinky too quickly now. Oh well, you only drunk tourney pick once, right? Probably.

The Badgers build a dam and beat the Ducks but then realize that Beavers build dams and I am drunk (Wisconsin still wins), UNC over Arkansas, Baylor takes there awesome ass uniforms and beats BYU (BYU has never seen that color before, it confuses them and they stop playing defense in pure amazement), Ohio State upsets Arizona because… Why not? (Shot #7) 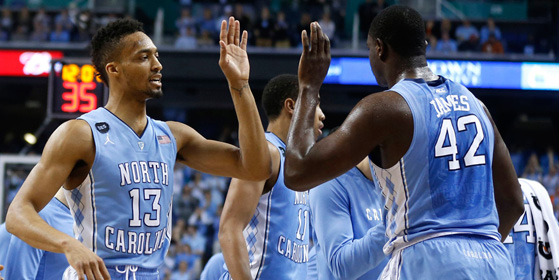 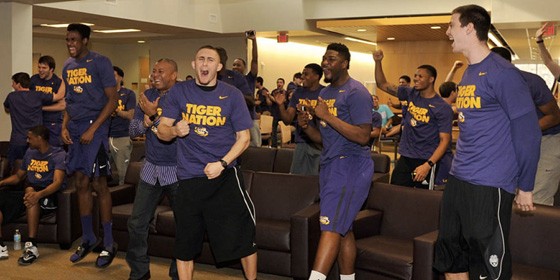 Villanova over Laffy, LSU upsets NC State (Shot #10 taken with much pride as I am an alumni of LSU), Northern Iowa easily beats someone, Louisville does the same, Providence wins, Oklahoma wins, Michigan State wins…

Uh-oh, excuse me a moment. Read a book until I return.

LSU upsets Villanova (Shot #12, and my bias comes out with the alcohol apparently), Louisville beats Northern Iowa, Oklahoma takes care of the Friars, and Michigan State moves on after beating Belmont.

Louisville and Oklahoma take it up a notch and each win decisiv…decissi…easily. 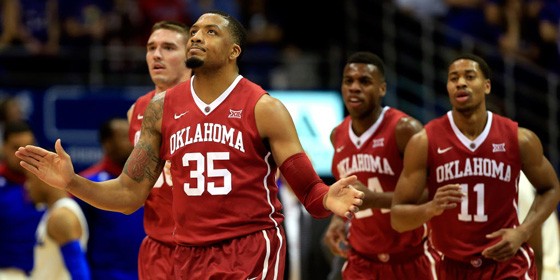 Oklahoma survives this region and heads to Indianapolis for the Final Four. 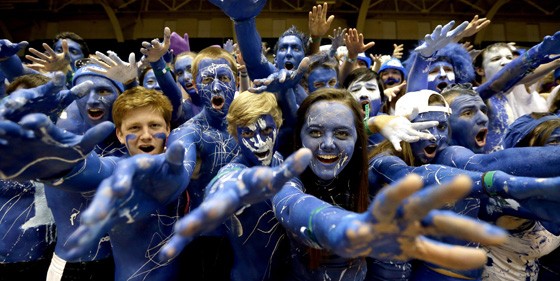 UCLA upsets SMU (Shot #13) Come on down, you’re the next contestant on drinking in my mouth.

Iowa State, Iowa and Gonzaga save my life and all win.

Utah and Iowa State settle my stomach and each take home the win. 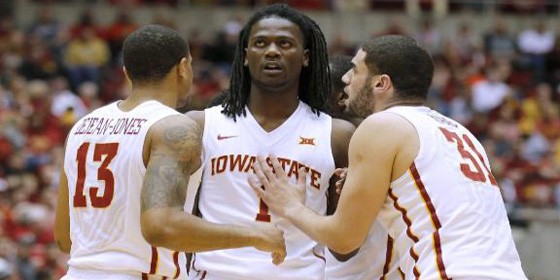 Iowa “Freakin” State wins the South (I bet you never would have thought you would hear that said out loud, did you?) Why did I do this? This is stupid and not funny and dumb and irresponsible, and… 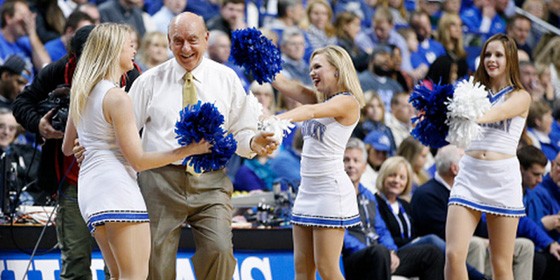 Look, the cheerleaders for the Wildcats and Tar Heels compete before the game in an epic dance off. No one wins except all the men in the stands. North Carolina reminds everyone that perfection is unattainable and they beat Kentucky in one of the best games your eyes will ever witness. (Shot #17)

Iowa State takes out the Sooners and shuts up the 10,000 screaming fans yelling out, “Boomer Sooner!” over and over again. That isn’t annoying as much as it is annoying. Wait, what? 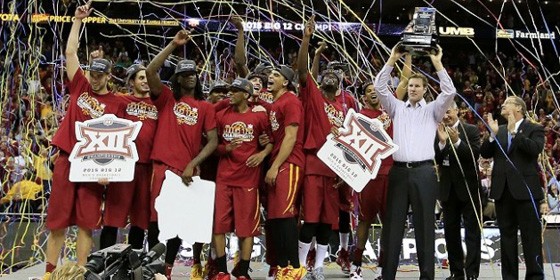 Iowa State is your 2015 NCAA Drunk Tournament Champion. Suck on that Bilas! Iowa State is the winner, my liver is the loser. Where’s the Tylenol?