Drunken Couple Break Into an Apartment to Bump Uglies 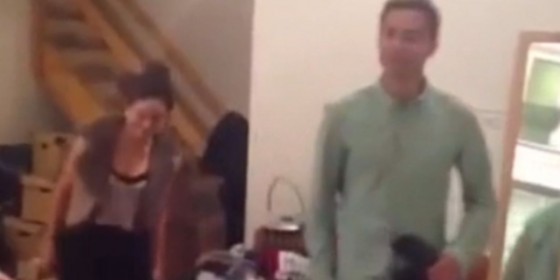 Last weekend a drunken man and woman allegedly broke into an East London apartment where they were quite literally caught with their pants down by an unsuspecting resident.

According to reports, 27-year-old Chris Sawyer and four of his friends returned home after a night on the town and shortly thereafter, they were all awakened by the sweet pornographic sounds of a strange couple bumping uglies in a vacant bedroom.

Rather than break up the spontaneous love affair drenched with overtones of breaking and entering, Sawyer and his friend Dave Cribb decided it would be funnier to document the experience for the sake of posterity instead of calling the police.

In addition to videotaping the whole twisted scene, Sawyer shared a tweet that said “Strangers in our house… banging,” while Cribb offered a little more insight into the group’s efforts to get “Goldilocks and the Unknown Humpsman” out of the house. “To be fair, they’re being ballsy: Are you serious?” he replies, when asked to leave. (Worth reiterating that neither of them live here).

After the couple finished, they were allowed to walk out of the house without incident. However, the next day, some friends of the embarrassed and hungover girl did show up to collect some personal items that were left behind in the heat of passion.

No charges have been filed against the so-called sex burglars, which is likely due to the attitude behind Cribb’s final tweet about the incident. “I feel that I must manifest my utter respect at their audacity to enter a flat they don’t live in, find a free room and just get on with it.”