Duke Fans are the Worst 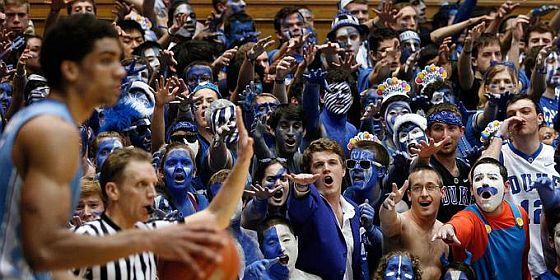 Duke and North Carolina have played 325 times, with each team recording their fair share of big wins in college basketball’s best rivalry. Last night’s game wasn’t nearly as important as most, with UNC coming into the game unranked and an underdog to #2 Duke. When Duke, unsurprisingly, held off Carolina for the win the Cameron Crazies proved just how awful they are by attempting to storm the court before being stopped by coach Mike Krzyzweski.

This bears repeating: Fans of Duke, ranked #2 and a significant favorite, chose to (attempt to) rush the court after beating an unranked opponent in regulation. For all the talk about how knowledgeable and connected the Crazies are, this is a bush league demonstration, especially with it happening close on the heels of Duke fans mocking an NC State player for his grandmother’s death.