Sports > Basketball > What Not to Do in a Dunk Contest

What Not to Do in a Dunk Contest 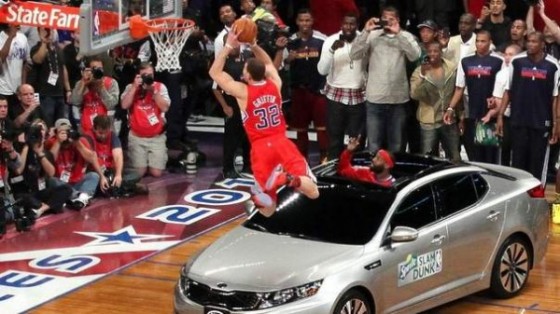 NBA All-Star Weekend is upon us. Stay tuned for awful celebrity hoops action, a head-to-head battle of the best rookie and sophomore chuckers (Jeremy Lin vs. Kyrie Irving, yo), Kevin Durant and Kevin Love bombing threes and a brand spanking new format for the tiresome Dunk Competition.

Only four dunkers will compete this year and they’ll have one round, not two, to impress Twitter nation. That’s right, the champion will be determined by folks using handles such as @LeFraudJames77 and @BlackMambaMama. I can’t wait. Especially since the only one of the four contestants I’ve heard of is T-Wolves rookie Derrick Williams. Paul George (any relation to Tate?), Chase Budinger (awesome movie frat guy name) and Jeremy Evans (huh?) being the other three.

Okay, so I’m a little behind in my pro basketball knowledge, but I still know what a slammin’ dunk looks like. So here’s hoping none of this year’s rim rattlers pulls a Tim Perry, or even worse, this:

is that Dwight Howard… priceless.