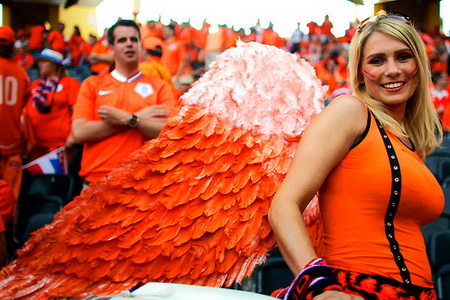 The Dutch are currently enjoying their revenge over Spain, after losing to them in the final of the 2010 World Cup. While the Netherlands is a strong team, this has to be considered an upset against the best team in the world, España. So I think you’ll forgive the country with the famous “oranje” fans if they do a bit of partying tonight. My Dad moved to America from Holland when he was 10, so I consider the Dutch my brothers. In order to help my fellow countrymen celebrate I have prepared a gallery of their rabid fans. The Netherlands is known for having some of the best fans in all of sport, I think you can see why :

For more sexy dutch fans, check out the girls of Bavaria Beer.