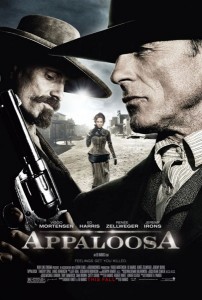 Although, it’s a better week for DVDs than the last week of 2008, it’s not looking too good this week.

There’s Swing Vote, Kevin Costner plays a beer swilling redneck whose miscast ballot turns out to be the deciding vote in the US Presidential Election. The ridiculous plot has the candidates swooping down on Costner’s small town and catering their political views to his interests. The filmmakers seem to be trying to make a political statement about politician’s campaign promises but it didn’t really work. It’s an OK film, but you’re really going to have to strain your disbelief for this one.

There are a few interesting movies coming out. Let’s take a look:

There are several Horror DVD’s coming to a store near you:

Next up we have a few straight to DVD comedies.

This weeks DVD Pick of the Week is Appaloosa. Ed Harris and Viggo Mortensen play a pair of law men who travel from town to town cleaning out the bad guys. Things get interesting when they’re hired to protect a town from an evil rancher who killed the former Sheriff.

Check out the rest of the movies available this week, or go to Amazon’s list of New Releases.

There are quite a few TV releases coming out this week.