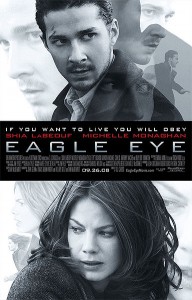 This isn’t exactly the greatest week for DVDs (if you couldn’t have guessed that already), but there are a few interesting movies being released this week. I’ll start off with the hot scantily clad women, which I know you want to see.

Next up is Eagle Eye. Eagle Eye stars Shia Lebeouf and Michelle Monaghan in what could be called a cell phone killer. According to IMDB:

Jerry and Rachel are two strangers thrown together by a mysterious phone call from a woman they have never met. Threatening their lives and family, she pushes Jerry and Rachel into a series of increasingly dangerous situations, using the technology of everyday life to track and control their every move.

“Four struggling actors retreat to a cabin in Big Bear, California in order to write a screenplay that will make them all stars. Problem is: What happens when their story idea — a horror flick about a group of friends tormented by a villain with a bag over his head — starts to come true?”