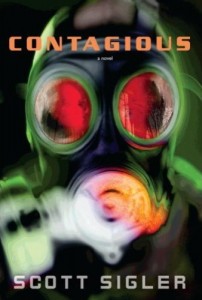 You probably won’t be surprised when I tell you that the week after christmas is not hottest week for DVDs in the recent weeks. There are some good rereleases, TV seasons, and a few interesting DVDs being released this week. Before I get into the DVDs this week I wanted to cover another December 30th release, but it’s a book not a DVD.

The first release I wanted to talk about is Scott Sigler’s newest novel Contagious. Contagious is the sequel to Infected. It’s a sci-fi horror thiller, and as the intro to his audiobooks state, it contains mature situations, adult content and lots…AND LOTS…of violence. Contagious is also available as a free audiobook and as a PDF on ScottSigler.com. Scott Sigler started releasing his novels as free audiobooks on his website in 2005 after his book deal for his first book Earthcore fell through when the publisher went under. Now he has 8 free audiobooks available on his website, including 6 full length novels (2 currently being released, including Contagious), and 2 short story collections. For ease of downloading, a DVD iso containing all of Scott’s books (over 50 hours worth) is available for download here and it’s also available for $6 on Amazon, in case you have a slow internet connection or no DVD writer.

There’s not much here I want to go into, of course there’s the roast of Bob Saget the foulmouthed Full House star, and Matthew McConaughey’s Surfer, Dude. There’s also Towelhead Alan Ball’s (the screenwriter of Americn Beauty) directorial debut, which does sound promising, but I don’t know enough about to give any sort of opinion.

Despite the paltry display of new DVD releases this week there are also plenty of rereleases coming out. First off there’s Hellbound: Hellraiser II – 20th Anniversary Edition, a classic 80’s horror flick and there are a few more classic’s being rereleased this week including:

There are plenty of Blu-ray films being rereleased including the outstanding Serenity, Joss Whedon’s action packed outer space western, if you haven’t seen it check it out. Joining Serenity in Blu-ray releasedom are the following films:

Also look for the following TV shows on store shelves this week: