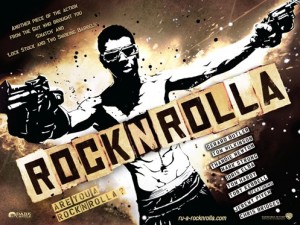 There are several good DVDs coming out this week. DVDs such as Kirk Cameron’s Fireproof and Edward Norton, and Colin Farrell’s Pride and Glory, TV Shows such as Cheers – The Final Season, and Blu-ray rereleases like The Bourne Trilogy

As good as those DVDs are this week’s DVD Pick of the Week is RocknRolla. Guy Ritchie has returned to his roots in his latest film, if you’re a fan of Lock, Stock and Two Smoking Barrels or Snatch check out RocknRolla.

RocknRolla is “an invigorating, grimly hilarious film with more gravitas and hangdog heroics than previously seen.”

I’m not even sure what that’s supposed to mean, but it sounds good to me. According to Amazon:

“Two low-level hoods (Gerard Butler of 300 and Idris Elba from The Wire) try to get into real estate, only to run afoul of a much bigger crook (Tom Wilkinson, Michael Clayton)–who, thanks to the machinations of a bored accountant (Thandie Newton, Crash), runs afoul of some very nasty Russian mobsters. But at the center of this web is drug-addled punk rocker (Toby Kebbell, Control), who unexpectedly proves to be just as adept at violence, scheming, and smartass quips as anyone else. Everyone seems to be having an infectiously good time; the convoluted plot holds together just enough to keep the action flowing smoothly, though when it’s over you’ll be hard-pressed to explain how one event led to another.”

Check out all the DVDs being released this week at Amazon.