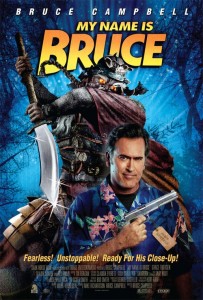 Up next we’ve got some very presidential DVDs The Inauguration of Barack Obama on CNN and Oliver Stone’s George W. Bush biography W.

And this week’s DVD Pick of the Week is My Name Is Bruce. Cult icon Bruce Campbell writes, directs and stars in his latest B-Movie extravaganza. According to Amazon:

Something evil is stirring in the small mining town of Gold Lick, and it’s not happy. Guan-di, the Chinese protector of the dead with a strange affinity for bean curd, has been awakened by reckless teenagers, and now his bloody crusade to wipe out the town’s entire population can only be stopped by one man – Bruce Campbell (the guy who starred in all three Evil Dead movies and Bubba Ho-tep), B-move star and deadbeat ex-husband extraordinaire, who’s recruited to be their unwitting savior. Thinking the whole scenario’s a publicity prank, Bruce is distracted from his mission by a hot mom and fan boys aplenty– but when our hero has to face off against a dark force more fearsome than a Hollywood agent, the laughs and screams start flying!

This one kind of reminded me of Bruce Campbell’s last book “Make Love! The Bruce Campbell Way”. It follows Bruce (playing himself, if you can play yourself in a book), as the B-Movie actor is offered an A-Movie part, also starring Renee Zellweger and Richard Gere. Of course, all does not go well, as he uncovers a plot to take his career down involving high level Producers, secret service agents and a SWAT team. I’d recommend the audiobook version, I’ve “read” it a few times and it’s an outstanding book. Bruce reads along with some other great actors.

Check out all the DVDs coming out this week at Amazon.