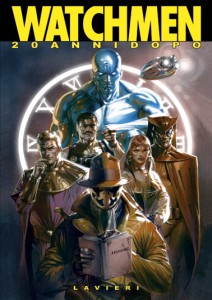 If you’ve been looking for some crappy DVDs then this is the week for you! We’ve got Air Bud (Special Edition), Ace Ventura Jr.: Pet Detective (maybe if it was a new version of the actual Ace Ventura: Pet Detective), and of course the impeccable Beverly Hills Chihuahua. There are a few decent DVDs coming out this week, like Australia. Well, maybe that’s not the best example, it got a 54% on RottenTomatoes.com, and the consensus was that it’s “Built on lavish vistas and impeccable production, Australia is unfortunately burdened with thinly drawn characters and a lack of originality.”

There are a few classic and recent TV shows coming out this week. We’ve got Nash Bridges: The Second Season, the classic stylings of My Two Dads: Season One, and what I’ve heard might be the best animated superhero film ever, Wonder Woman 2009.

And this week’s DVD Pick of the Week is Watchmen: The Complete Motion Comic. Before the movie’s released on Friday check out the comic it was inspired by (I know never use a preposition to end a sentence with). In fact check out the comic set in motion. According to Wikipedia:

“Watchmen is set in an alternate reality which closely mirrors the contemporary world of the 1980s. The primary point of divergence is the presence of superheroes. Their existence in this iteration of America is shown to have dramatically affected and altered the outcomes of real-world events such as the Vietnam War and the presidency of Richard Nixon. In keeping with the realism of the series, although the costumed crime fighters of Watchmen are commonly called “superheroes”, the only character who possesses obvious superhuman powers is Doctor Manhattan. The existence of Doctor Manhattan has given the U.S. a strategic advantage over the Soviet Union, which has increased tensions between the two nations. Additionally, superheroes have become unpopular among the public, which has led to the passage of legislation in 1977 to outlaw them. While many of the heroes retired, Doctor Manhattan and the Comedian operate as government-sanctioned agents, and Rorschach continues to operate outside the law.”