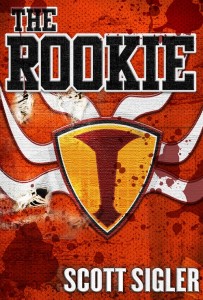 I have to ask, why does Hollywood assume that we won’t buy good DVDs at the end of April? It’s the same with movie releases. It’s as if they think that people would prefer to watch a movie on a sunny May or June day than a cold and rainy March or April afternoon. I’m really having a hard time picking this week, we’ve got The Beethoven Pooch Pack, that’s right a boxed set of all 5 Beethoven movies!!!! There’s also Anne Hathaway’s latest Bride Wars, but I’m pretty sure she’s not topless in this one so it’s out. If you’re looking for TV there are a few interesting selections coming out this week like X-Men, Volumes 1 and 2, American Dad!, Vol. 4, and Star Trek: The Original Series – Season 1 [Blu-ray], but I don’t think I’m enthusiastic enough about them to pick any of them.

Set in a lethal pro football league 700 years in the future, THE ROOKIE is a story that combines the intense gridiron action of “Any Given Sunday” with the space opera style of “Star Wars” and the criminal underworld of “The Godfather.”

Aliens and humans alike play positions based on physiology, creating receivers that jump 25 feet into the air, linemen that bench-press 1,200 pounds, and linebackers that literally want to eat you. Organized crime runs every franchise, games are fixed and rival players are assassinated.

Follow the story of Quentin Barnes, a 19-year-old quarterback prodigy that has been raised all his life to hate, and kill, those aliens. Quentin must deal with his racism and learn to lead, or he’ll wind up just another stat in the column marked “killed on the field.”

I first read (listened to) The Rookie a few years ago (partially on the way to a Pittsburgh Pirates game, different sport but it worked), when Sigler first released it as a free audiobook. He’s released all of his books for free on his site and I recommend you check them out. Of course, I only actually picked his book because I want to be one of the survivors after the FDO™ takes over the planet.