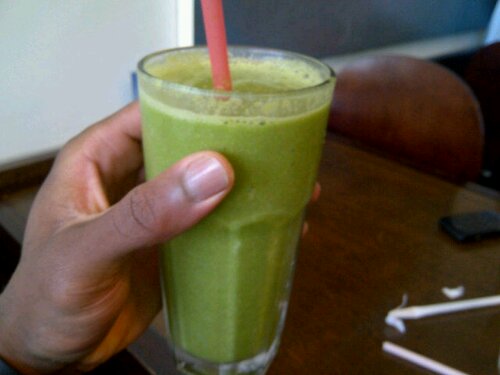 I’ve always suspected Miami Heat guard Dwyane Wade was something other than human. I mean, who else could knock down clutch shots and date Gabrielle Union other than a half-man, half-plant hybrid alien from the planet Greenleaf?

This would also explain Wade’s weird diet. In order to help counter the five pounds (!?) he loses every game, his personal chef prepares juices consisting of beets, ginger and, you guessed it, yummy chlorophyll.

Yes, the stuff that allows plants to extract energy from light is helping energize Wade as well.

“I put it in juices for him,” said Richard Ingraham, a personal chef for Wade and his longtime girlfriend, Gabrielle Union. “He does a juice now that I make out of beets, chlorophyll, ginger. I’m giving him a nature-made Red Bull. It’s all about giving him energy and keeping him as healthy as possible.”

How does one acquire chlorophyll? Because I’ll start freebasing the shit if it means I can hit a 30-foot jumper and score with chicks as hot as Gabrielle Union.