Dylan Hayes is Probably Superman and Possibly a Ninja

Yesterday we told you about how an English guy messed up being Batman. Well, today we’re happy to tell you about a kid who absolutely rocked the shit out of being Superman. Apparently the world detected just how shitty that English guy had messed up and opted to fix it by imbuing a small child with magical ninja powers to restore hope that superheroes do exist.

When four-year-old Dylan Hayes climbed on top of his couch to talk to some neighbors out his window, no one expected they were about to witness God himself making a bet with Satan. Young Dylan fell out of his window and plummeted 20 feet towards the Earth.

This is normally where you expect the words “tragic” or “smear” to appear, but here on Gunaxin we only report awesome stuff and young Dylan simply had too much shit to do that day to be bothered with any of that dying jazz.

Instead of crashing into the ground and becoming a small heap of crushed toddler bones and flesh, Dylan did 2 sweet-ass flips and landed on his goddamn feet, simultaneously flipping off the Grim Reaper and gravity in one go. 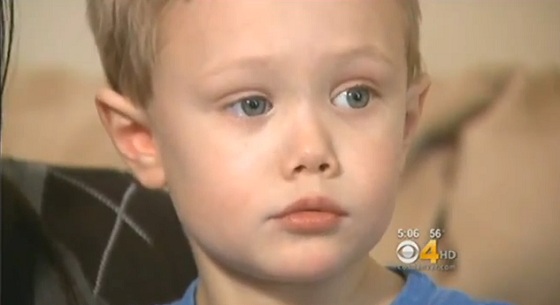 “There were ladies watching, going down like a punk just wasn’t an option.”

But here’s the best part, Dylan was wearing a Superman T-Shirt when this happened, because life is just that rad when you’re a total boss. Dylan suffered virtually no injuries from his fall and in fact did more damage to the window screen his body sailed through. Because even at this young age, Dylan knows that real superheroes cause collateral damage.

So yeah, England may have messed up Batman, but damn did America deliver on the Superman front.