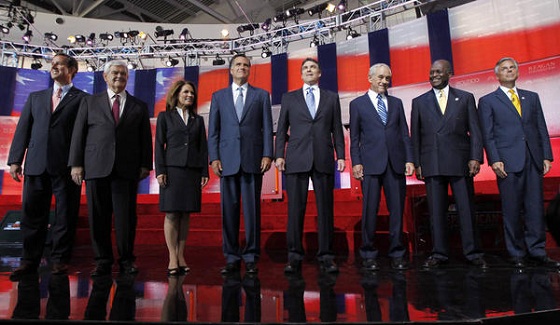 And now, your American Gladiators!

Let’s be honest here, it hasn’t been the greatest election season for the GOP. Despite the wide cast of characters we’ve been presented with, many feel there simply aren’t any strong choices. Some are too similar, some are too radical, one guy might be a Reptilian, the list goes on. But while Freedom Eagle weeps from sea to shining sea, we can still look back and fondly remember the many shining moments of these campaigns.

Before announcing her intentions to run, Michele Bachmann appeared on FOX News to drop a verbal deuce in a spectacular fashion. While discussing why she would make the announcement in Waterloo, Iowa, Bachmann said this:

"Well, what I want them to know is just like, John Wayne was from Waterloo, Iowa. That's the kind of spirit that I have, too."

Hey, who doesn't love John Wayne? Remember that movie where he shot all those guys? Awesome.

But as the Washington Post was quick to point out, John Wayne had no ties to Waterloo despite being born in Iowa. However, John Wayne Gacy, infamous serial killer and poor choice of a role model, was from Waterloo. Bachmann had unintentionally compared herself to a serial killer. 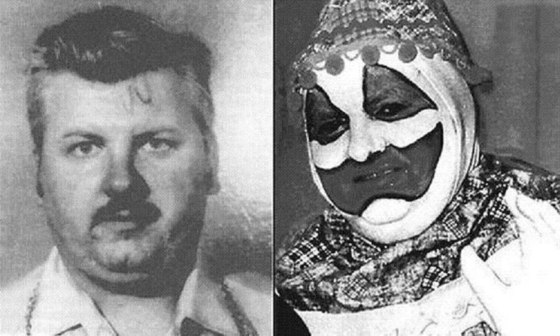 We can't knock her too hard for this since we're pretty sure she has someone else prepare her speeches and such, but we're hoping that whatever intern blew the basic Google fact-checking on this one got the ax. If there's one thing the American public can't tolerate from its politicians, it's botching things most of us learned during games of Trivial Pursuit.

As one of many groups wielding clout within the GOP, Family Leader presented its “Marriage Vow” to candidates looking for their support. All they had to do was sign it, which apparently meant not reading it.

Bachmann and Rick Santorum were quick to sign the document and toot the marriage horn from the mountaintops. Unfortunately for them, their haste meant they missed the bit claiming it was better for the integrity of an African-American family to live under slavery than in the current social structure of the United States: 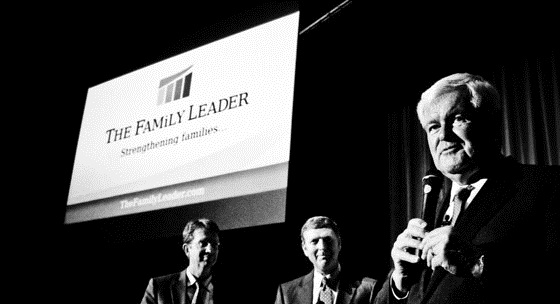 It's a little bewildering that people actively looking to become the President will slap their signatures on anything at all, but it's even more concerning that someone actually wrote that paragraph, presumably proofread it and still thought it was a good idea. You can read the entire pledge here.

While the media seems to have largely forgotten about Cain after he dropped out of the race amid sexual harassment allegations, he will forever hold a place in the hearts of gamers for not being able to distinguish between the words of “a great poet” and the theme song from Pokemon: The Movie 2000.

It's a flub of a different sort. While Bachmann's words implied that she regularly stuffed bodies into bloodied freezers, Cain's made us wonder if it was possible for a major CEO to own a Gameboy. The exact quote is, “Life can be a challenge, life can seem impossible, it's never easy when there is so much on the line. But you and I can make a difference.” Cain claimed to hear it during the 2000 Olympics, and while he never outright denied Pokemon as the source, he has yet to acknowledge any desire to catch 'em all. 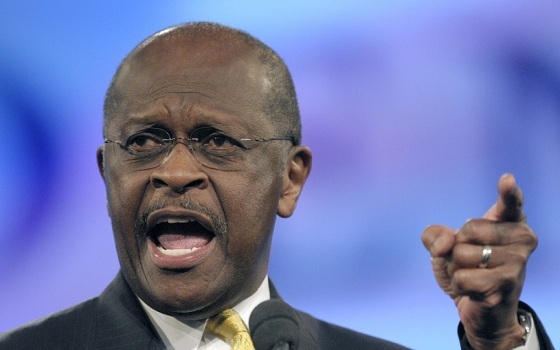 Picking our favorite Rick Perry moment has proven to be difficult. While we're inclined to go with the infamous “Oops” heard around the world, we can't deny the awesome power of his “Strong” campaign ad:

The first thing you'll notice is that Perry looks great in over-sized jackets. The second thing that you may notice is that comments on the official video are disabled, presumably because over 700,000 people hate it, making it one of the least liked videos on all of YouTube. The negative response was so strong that Perry's campaign disabled the like/dislike feature on future videos.

But if not for Perry and the strength of his jacket, we wouldn't have delightful parodies like these:

Thank you, Rick Perry. Don't ever stop doing whatever it is you do.

Newt's had some pretty embarrassing moments. For example, he botched the date of the presidential inauguration, implying that he would show up too early or too late for the job should he be elected. Then you've got “The King of Bain,” an anti-Romney attack video that was so quickly debunked that Gingrich himself asked the group behind it to either correct the information or take it down. There's also the matter of him looking kind of like Auric Goldfinger if you squint a little. 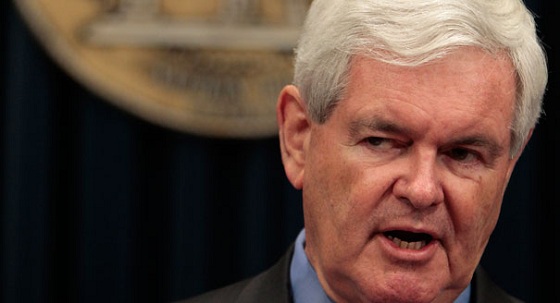 Perhaps it's only fitting that he looks like a Bond villain, because many of his ideas and proposals seem like the sorts of things you'd be down for if you've ever wanted to hijack the GoldenEye satellite. The website Supervillain or Newt surfaced last year and poses what one would think is a simple question: are ideas like harnessing a network of space lasers or utilizing mirrors to control daylight hours the thoughts of Gingrich or fictional madmen? It seems silly at first, but sometimes art imitates reality (and vice versa) a little too well.

Those of you who refuse to venture deep into the dark depths of 4chan.org (never, ever safe for work) might be surprised to learn the FBI's most watch-listed image board has a section for politics, /pol/ (still not safe for work). In any given thread you're likely to find a "Doom Paul" image macro.

Originally created back in 2009 on a previous incarnation of the board, Doom Paul mixes creepy apocalyptic warnings with liberal abuse of Photoshop filters and impact font to warn of a future where Paul isn't elected. Since the meme was reintroduced in 2011, folks have fully embraced the awesome power of Doom Paul. You got your guilt trips: 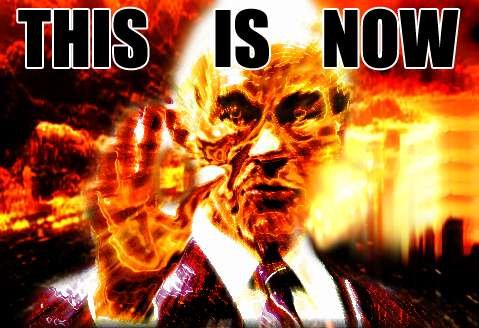 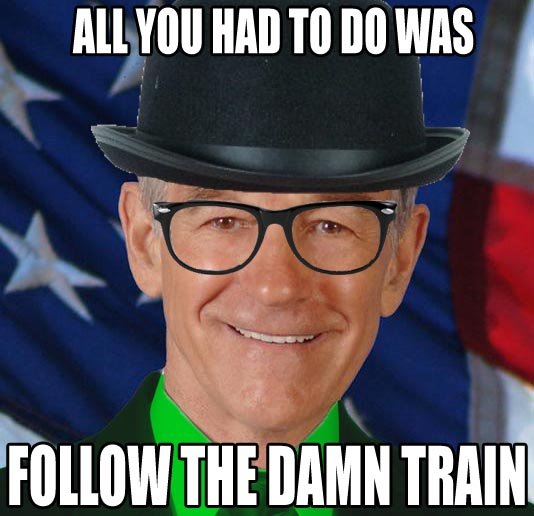 And whatever the hell happened here: 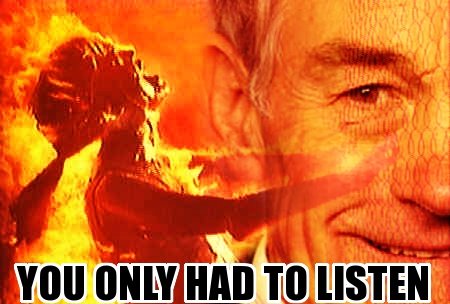 Used by supporters and detractors alike, Doom Paul has a little something for everyone, at long last uniting the political spectrum.

Anyone who runs for President should expect that virtually any and every mistake they've ever made will eventually resurface as things heat up. If he didn't learn this lesson before, front-runner Mitt Romney certainly has now after the drama of Doggate.

In 1983, Romney took his family on a twelve-hour road trip to Canada. The family dog, Seamus, was placed in a kennel and strapped to the top of the car for the duration of the trip. At one point, one of the children in the car noted a dark-brown liquid dripping down the back window. It turned out that Seamus was not having a good time.

The story resurfaced as late as 2007, but has been making the rounds again this year with people outraged over the blatant negligence. A few have used the incident to characterize Romney as a cold, unloving man. In a feeble effort to defend himself, Romney claimed the kennel was “air-tight,” though he failed to explain how an air-tight container could leak dog shit or how his dog could hold its breath for twelve-hours since it would have no air. 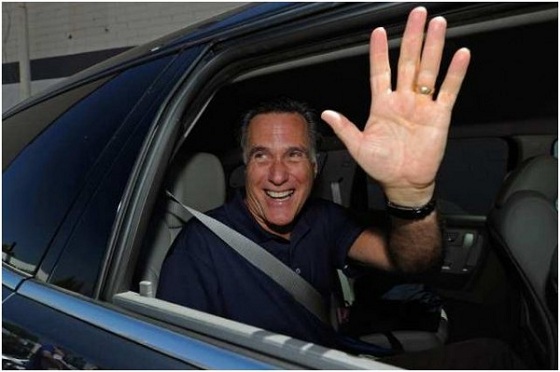 There are twelve poodles strapped to the top of that car.

Since the story broke again this year, websites have been popping up for dogs against Romney. Greater still is a new meaning for Romney: to defecate in terror. Of course, he could have gotten off much, much worse.

Way back in 2003, Rick Santorum compared homosexuality to bestiality and incest, presumably because previous attacks on homosexuality simply didn't go far enough. But regardless of the logic behind his sweeping generalization, it caught the attention of sex advice columnist and gay rights activist Dan Savage. Acting as an Internet Batman, Savage lead a campaign to change the meaning of Santorum to something incredibly lewd. If you somehow don't know the definition by now, feel free to Google it. We'll wait.

Rick's problem continues to this day, though the website that hosts the original redefinition, SpreadingSantorum.com, has become more popular as Rick's poll numbers surge and is currently one of the top results when searching for "Santorum" or "Rick Santorum," edged out only by poll results and the official campaign website.

To combat this, the fight was taken to Google: clearly the site remained a top search result because of a political bias. Rick and his supporters lobbied for Google to filter the results. Google's response: a resounding “meh.” Since the website's popularity wasn't the result of a Google bomb or someone trying to hustle the algorithm Google uses to rank websites, they found no reason to censor the page and its frothy contents. 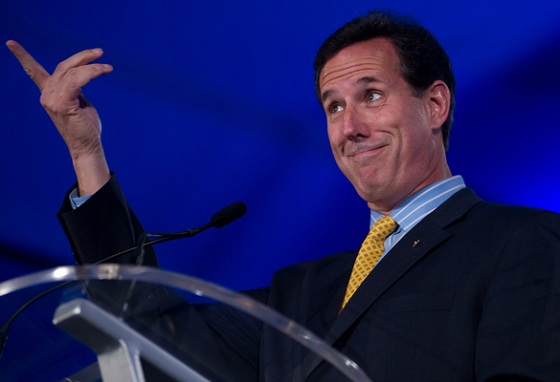 Interestingly enough, this isn't Santorum's only Google problem. Wikipedia points out that a search for “man on dog” brings up several pages of articles discussing Santorum thanks to the previously mentioned speech he made. Maybe he should just choose his words a little more carefully.