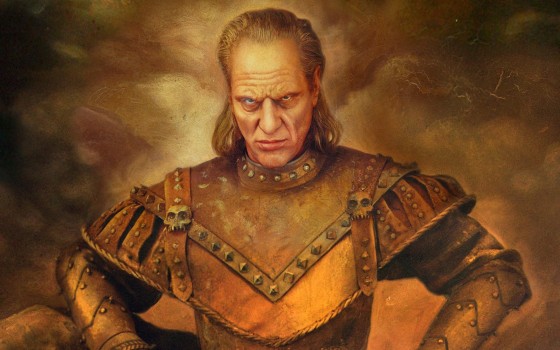 Stop for a second. Just stop what you’re doing and think. Think for just a second. Does it feel maybe a little like someone’s watching you? Don’t you have that frigid shudder -that eerie icy stripe- running the length of your back and popping just a bit out of the top of your head?

You know that feeling; its late, it’s lonely, it’s almost deafeningly silent… and there it is. Maybe coming from a corner, maybe coming from another room… or wait: is it coming from that painting hanging above the mantle? It’s that sensation that you get the minute you realize that something just isn’t quite right, maybe a little off true. We’ve all had had it, but why is that painting looking so… off?

What follows are eight pieces of artwork -six paintings and two dolls- that definitely make you realize that hauntings don’t necessarily begin and end with ghosts. Unlike our friend Vigo up there, these examples… are real.

According to historical records and such, Delphine Lalaurie and her husband were well known for hosting extravagant parties in the mid-1800’s, including grand balls with endless drink and food. Sure, they owned slaves -a lot of them in fact- but it was what she did to them to keep them submissive that was discovered during a mansion fire that was so gruesome: proof of beatings, mutilations, and worse.

Years later, long after their deaths, the Lalaurie home is considered one of the most haunted places in New Orleans. Then the ’90s came and a piece of art was commissioned, a Portrait of the Lady Delphine by Mardi Gras artist Ricardo Pustanio. Then things get really bizarre.

Though the painting is, by all accounts, normal and painted in no specifically unusual way, the stories of disembodied voices, moaning, scratching, odd movement, and the feeling of dread and just plain evil have permeated its history since its creation. 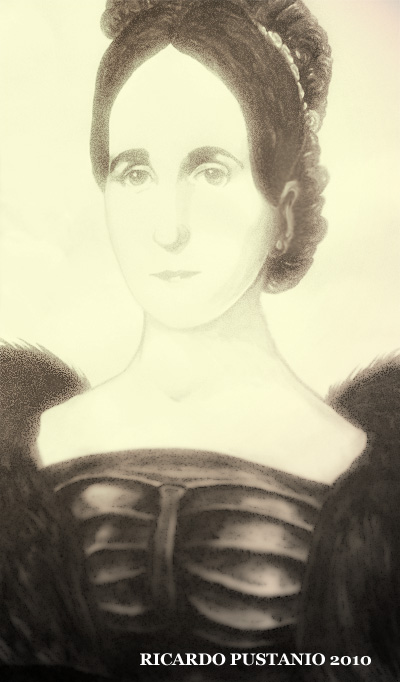 There are few things on earth more frightening than a haunted doll, and Robert the Doll is definitely one you don’t wan’t to spend a lot of time alone with. He might even curse me for ending that previous sentence in a preposition!

Anyway, it all began back in 1906 when artist Robert Eugene Otto was given the doll by a Bahamaian servant skilled in the Black Arts and Voodoo. At the time, Otto was a child and reported of his parents hearing him talking to the doll and, often, found screaming among a messy room claiming that the doll itself had done it, scaring him terribly in the process.

Well, Otto passed away in 1974 and thus the doll changed hands, landing in those of a little girl and her family who moved into the old house. She, too, began having her own occurrences including threats made by the doll toward killing her. Now a days, Robert the Doll resides in the Fort East Martello Museum in Key West. Remember, don’t go taking pictures without asking permission, or you, too, might feel the curse… 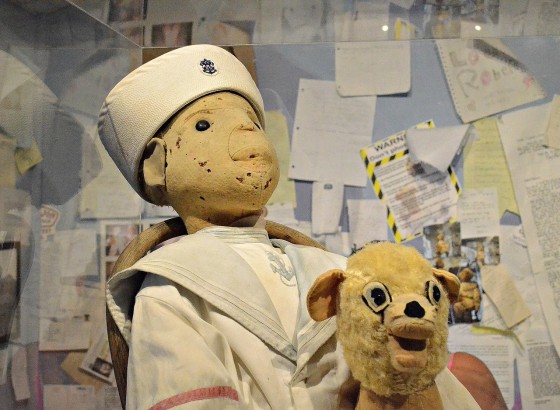 Munch’s most famous work is undoubtedly The Scream, but some might find it surprising that all of his works have an air of creepiness and unsettle about them. Munch’s childhood life was filled with tumult and sorrow. He was often ill for long periods -most often during long cold winters- and spent much of his young life out of school. He’d draw, and paint, trying to while away the hours, but his world would be turned upside down yet again when his mother died after giving birth to his younger sister. Soon, his other sister would die of tuberculosis, while at the same time his religious fanatic father would consistently read him scary stories, like those from Poe.

Munch led a life of debauchery, failing at his early life of artistry, much to the chagrin of his disapproving father. His dad eventually passed, and Munch’s thoughts became suicidal. Soon, after nearly going insane, Munch finally knew success… but it was fleeting at best until after his death. This life of trials and tribulations would show themselves in his later works, and several of them, said to be inundated with sorrow and pain, are haunted. The Dead Mother is just one where the girl’s eyes are said to follow viewers and the bed sheets ruffle by themselves. Of course the image below won’t do that for you, because honestly, who has ever heard of a haunted jpeg? 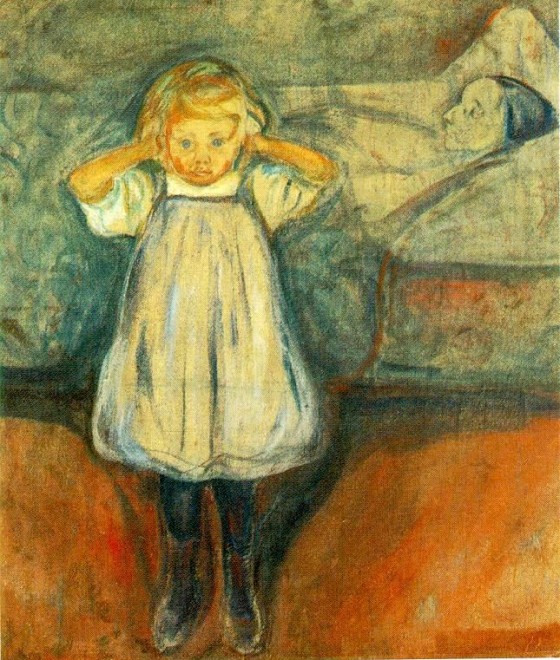 Remember the beginning of The Conjuring? Well, if you’ve seen it you would, because it all revolves around a haunted doll called Annabelle. Not only did this doll move freely, but it also left notes on bits of paper. If that wasn’t bad enough, this doll is based on one that’s 100% REAL. That’s right, despite the fact that the actual plaything is your run-of-the-mill Raggedy Anne doll, it’s as haunted as you read about none the less.

In 1970, the doll was acquired by a college girl named Donna and her friend Angie. Almost immediately Annabelle began to move, and not just a little bit either- all around the house. Soon, she was leaving notes on Parchment (parchment neither of the girls owned), and bleeding somehow from itself.

Finally they brought in a medium who wrongly assumed that the spirit of a little girl had attached itself to the doll (her name was, obviously, Annabelle), and that it just wanted to be safe with the girls. This was a really bad idea, and soon more of the same -only worse- began happening including nightmares about the doll killing people. This is when Ed and Lorraine Warren were brought in, and they discovered that the doll was actually possessed by a demon. It now resides in a glass case in their basement, because glass is apparently kryptonite to a possessed doll. 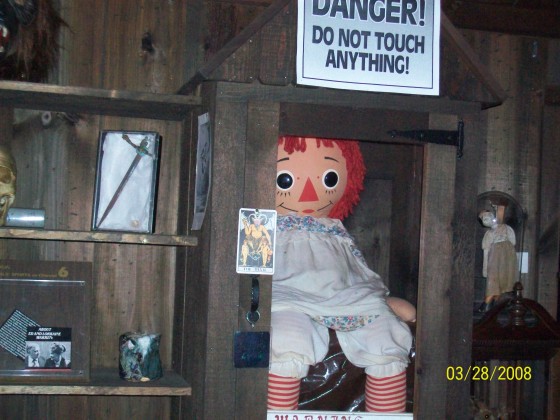 5) The Portrait of Bernardo de Galvez

It seems that these particular haunted paintings really don’t like having pictures taken of them. In fact, unless you ask nicely of the de Galvez portrait, you’re likely to get something like a fogged image or a picture of a skeleton (which has happened, by the way). Bernardo was a Spanish Colonial governor who first chartered the Texas Gulf Coast and for whom the city of Galveston was named.

This specific picture which hangs in the Hotel Galvez in Texas, a haunted inn named after Bernardo himself, is said to have eyes that follow you, and can give patrons the chills. Luckily nothing too evil has happened, unless you count that picture with the foggy skull. I guess that’s pretty bad. 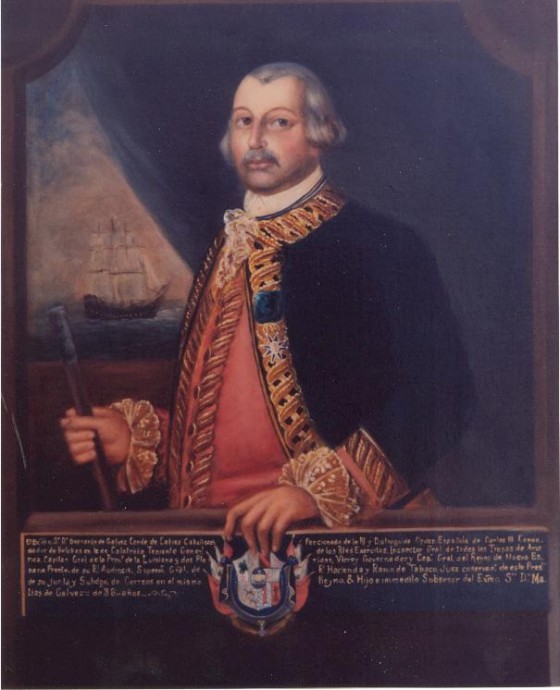 Why anyone in their right mind would want a painting of a crying child hanging in their home in the first place is beyond me. But they do. Apparently these particular images -first mass produced in the 1950s- have a rather death-defying talent of surviving house fires. In fact, starting in the mid ’80s in Britain, firefighters would find, after extinguishing the flames, that these images of weeping and anguished youths would remain wholly in tact.

Why? No one can be entirely sure though there was some speculation that the printing process imbued them with some kind of fire retardant. Regardless of how or why, rumor spread and even the firefighters themselves refused to hang one of the pictures anywhere near their homes. It’s not clear if they caused the fires, but for a while they were involved in a good many of them. 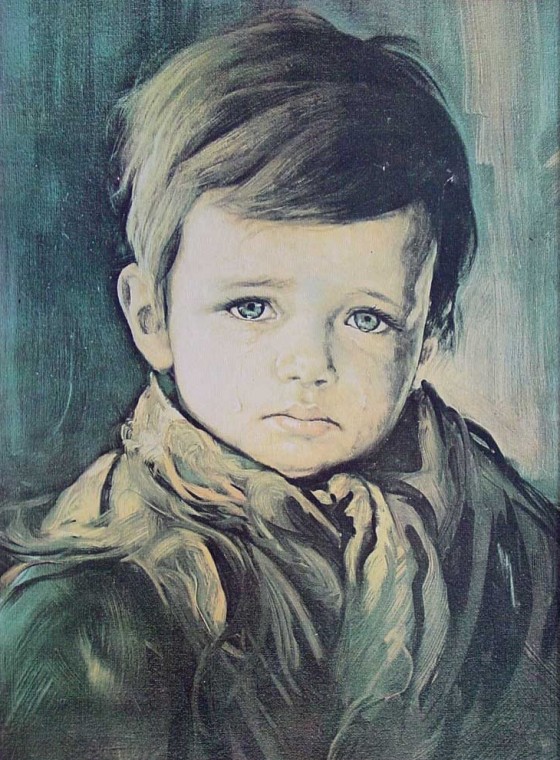 Trust me when I say the most disturbing thing about this painting isn’t the fact that there are no details about the artist before or after it was done, other than to say that he(?) evidently used his own blood in the medium to create it and then shortly after committed suicide, all the while potentially dabbling a bit in occult-type practices. These startling pieces of the puzzle certainly give new meaning to the term ‘pouring one’s heart and soul into the work’ for sure.

Secondly, just take a long look at this thing: horrifying, grotesque, and revolting only serve to scratch the surface of how this thing presents itself. The title is indeed apt as it looks remarkably like the man is possibly burnt and melting, almost as though he were made of bloody wax. After it had passed from a few owners -each claiming terrible experiences of noises, spoken ethereal words, and murderous nightmares, it has landed under the ownership of Sean Robinson who has posted a few videos concerning the painting on YouTube. On it he invites you to be the judge of the authenticity of the activity. Regardless of the ‘haunted’ feelings surrounding it this is just one damn creepy picture. 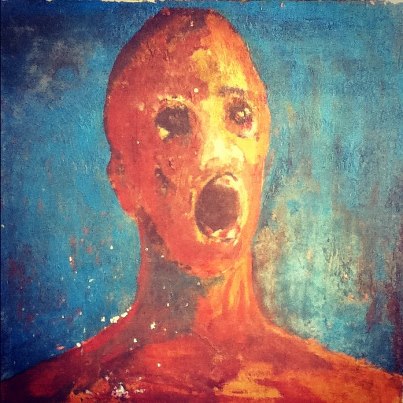 8) The Hands Resist Him

In this incredibly odd -and infamously known- painting, what we see depicted is a boy (supposedly a portrait of the artist as a youngster) and a creepy doll, standing in front of a pane of glass where many hands are pressed upon it. The story goes that the doll is to lead the boy through the world of fantasy and unreality represented by the hands… and they, evidently, resist him and his potential travels. Beyond those facts, it’s just a really disturbing image to say the least.

The weirdness began after the original purchaser of the painting, John Marley (an actor best known for his roll in The Godfather) passed away and the picture was recovered behind an old brewery in California. Shortly thereafter it was posted on eBay where the tales truly began to spread. It was said to carry some kind of curse or haunting wherein the characters in the painting would come to life often times actually leaving the canvass and stepping into the room. In one instance, the doll in the picture can be seen apparently holding a gun to the boy.

Those feelings and twisted manifestations aside, while on eBay many people claimed to just plain feel weird and spooked just to be looking at it. For my money, this is by far one of the most bewildering images I have ever seen. There’s just something so off-putting about it, even though it’s a beautifully done painting, that seems to give me the willies. Creepy. 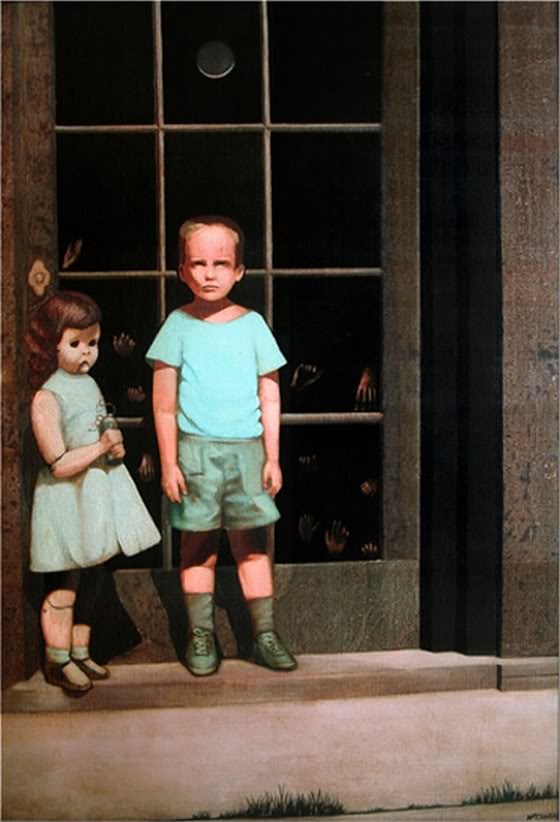