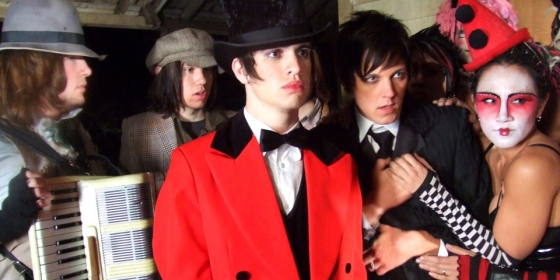 Long time fans of this site may recognize this topic, and say, “They’ve done this before!” So why would we want to revisit, and subsequently pen a sequel to, an article from April of 2011, entitled Eight Classic Songs with Circus Themes? Because we figure if Stephen King can get away with creating continuations to twenty or thirty-year-old books, then why the hell not? Also because the subject wasn’t quite complete, at least to our satisfaction. And hey, since restrictions were put on the last article keeping it within the era of “Classic Rock”, we chose to branch out a little and added a few more recent gems to the list.

For some reason, many musicians have chosen to hide little circus allegories in their music. We suppose it does make sense, after all, isn’t life under the limelight, on a big stage, in front of hundreds or thousands of cheering fans just a bit like performing under a giant tent next to smelly elephants and fire eaters? Apparently, yes. So without further pause, here are eight more rock songs that maybe you could juggle flaming chainsaws too.

The Show Must Go On – Three Dog Night

Not too much about the song itself (trust me, if you listen to classic rock at all, you’ve heard it), but the original album artwork depicted some kind of monstrous woman actually giving birth to a record album. Look it up, it’s kinda creepy.

I Write Sins Not Tragedies – Panic! at the Disco

Featuring a slew of carnival folk and a ringmaster played by frontman, Brandon Urie, this video shows a wedding gone fully ridiculous. Before the release of their newest album last year, this was Panic!’s biggest hit and a song everyone secretly knows and loves.

Though many had their preconceived notions that Blondie and Debbie Harry had seen their heyday long ago, the band didn’t think so and released an album that garnered a galaxy of reviews from very good to abysmal. Anyway, Blondie was back and their first (and only) single was this little ditty.

Sometimes, Wikipedia can actually make you roll a tear: “The song describes the relationship of a “music man” on the road. The difficulties of raising and maintaining a family, two strangers having to fall in love again, and staying faithful while touring are brought up. However, he suggests that he gets the “joy of rediscovering” her, and insists “I’m forever yours… Faithfully.”

This video from the post-grunge band, Seether, features what could be easily described as the most F’d up circus sideshow/carnival attraction of all time. We see a boat leading some fans to what obviously becomes their ultimate mental breakdown with plenty of creepy visuals along the way.

The Show Must Go On – Queen

Freddie Mercury, lead singer of Queen, was dying of complications from HIV/AIDS. However, at the time of this song’s release, no one outside of the band (and a select few others) actually knew. This song, the last on their Innuendo album, was written primarily by Brian May and was nearly deemed too difficult to sing by the ailing Mercury. Instead, he summoned what remaining strength he had and nailed it.

We included this song for two very important reasons. The first, and most obvious for this list’s purposes is the lyric that includes ‘bullshit three-ring circus sideshow’ even though the song itself illustrates what could happen if and when California breaks at the fault line, giving Arizona its own coast. Secondly, well, it’s a kick ass song and sometimes that’s all ya need.

From the Album Brain Salad Surgery (1973)

On this particular album, the song Karn Evil is broken up into parts that run throughout the songs. The most well known chunk is this one and features, “The decadence of the old world preserved through exhibits that are part of a futuristic carnival show, which exhibits depravities like “seven virgins and a mule,” along with things that are rare in the future, such as a “real blade of grass.” It’s a great record and features amazing artwork from Alien designer, H.R. Giger.