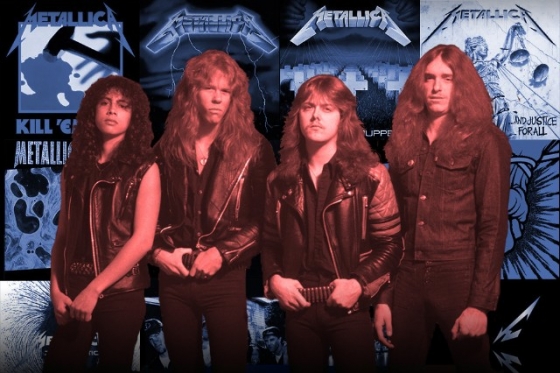 Those damn hair bands. With locks longer than Rapunzel’s, and voices to match, they flooded the airwaves of the eighties with the kind of music that, love it or hate it, gave heavy metal a bad name. But it wasn’t all love ballads and thinly veiled sexual references back then. If bored listeners were willing to turn off the radio and scour the back bin of the record shop, they might have been lucky enough to find a few bands whose balls had not yet been removed by record company executives. While MTV was playing Poison, dedicated metal-heads were rocking out to thrash.

Thrash is a sub-genre of metal that takes the basic formula laid out by bands like Black Sabbath, Iron Maiden, Judas Priest, etc., and combines it with the speed and fury of punk rock. The result: some of the most testosterone soaked songs you’ll ever hear. Below is a recap of some of the early classics to get you started.

Although Motorhead was never officially a thrash group, Lemmy Kilmister and his bandmates are the undeniable godfathers of the genre. Their combination of staccato riffing, propulsive drums, and unstoppable attitude influenced every band on this list. Featuring one of the most recognizable bass lines in the history of music, the title track to their 1980 Ace of Spades album is an artifact of pure, no frills, balls-to-the-wall rock and roll. Even Gandhi would want to kick the living shit out of some punk after listening to this one.

Among the thrash bands of the Eighties, none played faster than Slayer. Metallica may have been more technically proficient and Testament may have explored the boundaries of melody with greater interest, but Slayer cornered the market on speed, going so far as to cover Iron Butterfly’s seventeen minute opus “In-A-Gadda-Da-Vida” in under three minutes. The group perfected their take-no-prisoners sound on the 1986 Reign in Blood album, featuring fan favorite “Raining Blood.”

Dave Mustaine has always been pretty pissed off at Metallica. Before their first album was released, he was the band’s lead guitarist, but after numerous fights, rhythm guitarist and lead singer James Hetfield gave him the boot. Sure, being kicked out of the most successful heavy metal band in the world isn’t the best set of circumstances to find yourself in, but Mustaine seems to forget that his own group, Megadeth, although never as profitable as Metallica, certainly managed to serve up some generous helpings of thrash. “Peace Sells,” from the 1986 album Peace Sells…But Who’s Buying? displays Mustaine’s talent for composing catchy riffs while making some heavy-handed but clearly passionate criticisms of society.

Known for their intriguing use of melody, Testament never achieved the success off fellow San Fransisco thrashers Metallica, but that didn’t stop them from releasing some solid recordings. “Into the Pit,” off their 1988 album The New Order features Iron Maiden-esque riffing and tight, snare-heavy drumming that sets the perfect soundtrack for a mosh pit.

Before Scott Ian was best known for being that weird looking guy who always shows up on VH1 countdown shows and anthrax was best known as the sacriest thing to come in an envelope since a college loan bill, the two made up New York City’s most popular thrash group, (you guessed it), Anthrax. Deriving much of their subject matter from whatever elements of pop culture the band members had absorbed, the group wrote such tunes as the title track to their 1987 album Among the Living, inspired by Randall Flagg, the Satanic character from Stephen King’s apocalyptic novel The Stand.

Not to be confused with the significantly more mellow Bob Marley album of the same name, Exodus was one of the pioneering bands of the thrash metal scene. Founded by Kirk Hammet, who would eventually go on to play lead guitar for Metallica, Exodus is known for their searing solos, frantic riffs, and almost humorously violent lyrical imagery. Below is the title track to their most successful album, Bonded by Blood.

As one of the most consistent and uncompromising bands in the history of thrash metal, New Jersey’s Overkill has been providing its fans with ass-kicking music since 1984. Deriving their name from a classic Motorhead song, Overkill’s approach is one of pure aggression, although they have also been known to explore a groove-based, Sabbath-esque sound. At the height of their talent came the album The Years of Decay, featuring the anthem to anger, “I Hate.”

Before Load, before Napster, before that damn therapy movie, Metallica still had your respect. And they didn’t just have it, they commanded it. These guys didn’t just write songs, they orchestrated them, and when they were at their best, you might as well have been listening to Beethoven. There are too many classics to choose from, but who can say no to “Master of Puppets”? Propelled by machine-gun riffs, agonized melodies, and inhuman drumming, this tune took thrash to a whole new level. It’s a classic for a reason.