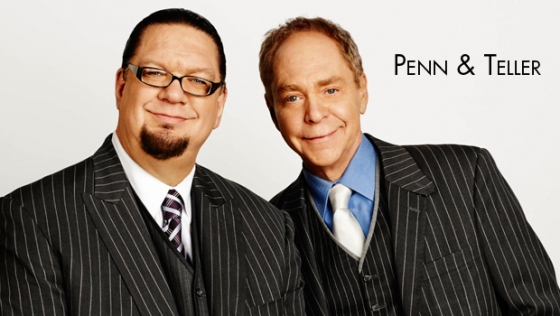 Throughout the history of entertainment, there has always been the Duo. The skilled couple who plays off each other, dances together, performs together and does their very finest to make their act fantastic. So, in saying that, here’s eleven of those magical, wonderful pairs who are actual, real, magical and wonderful pairs. That’s right, even if it’s an act, they use their real names and are 100% authentic people. Check them out!

Donny and Marie (The Osmonds)

Airing on ABC from 1976 to 1979, brother-sister act Donny and Marie Osmond wowed audiences with their ridiculously creepy relationship, angelic voices (ooooookay) and stupid, stupid costumes. And yes, they are still performing.

Working vaudeville, stage, radio, film and television, William “Bud” Abbott and Lou Costello are one of the most well-known comedic duos from the 40’s and 50’s, not to mention all-time thanks largely to their hilarious “Who’s on First?” routine.

We all know (and maybe love?) the song, “I Got You, Babe”, right? Sure ya do. Well, as it turns out, Sonny and Cher Bono wrote and performed it several hundred times! Because that’s what they did as the awesome duo they were in 60’s and 70’s! They not only sang, but the also had a TV show that focused on the popular variety format of the time. Cher is kinda hot… for an ancient skeleton.

Richard “Cheech” Marin and Tommy Chong are better known as Dick and Tommy… just kidding. We all know they are Cheech and Chong, and the entirety of their films were based solely on the fact that they were, probably, really high. Together they released eleven albums and eight movies, each and every one of which is way better if you’re baked.

From 1929 to 1958, George Burns and his wife, Gracie Allen performed their comedy act on every conceivable platform including vaudeville, early radio, early TV, and early film. Oddly, though we might know George Burns as the comedic half of such flicks as Oh, God!, where he teamed with John Denver, he was the straight man with Gracie, with her playing the bumbling half-wit.

Beginning at the famous Atlantic City 500 club in the summer of 1946, the comedy duo of Martin and Lewis debuted their first performance. Granted, their first act together bombed, but once they decided to go off script and let Dean Martin sing and Jerry Lewis act like a goof-off, everyone loved it. Together, over the next ten years, they’d make 17 movies.

Keegan-Michael Key and Jordan Peele could be considered the funniest and most talented duo of the 2000’s and that would not be a lie. Though their show aired on Comedy Central from early 2012 til mid-2015, their range and quality of sketches will live on forever in humor history. Tackling hilarious issues ranging from psychopathic girlfriends to Liam Neeson, these guys made everything funny.

Comprising one-half of the biggest and most influential bands of all time, Lennon and McCartney wrote nearly all the songs (a whopping 180) for the Beatles. They are widely regarded as the best and most prolific singer-song writing team of all time giving us two of the finest composers since Beethoven. Not my words, but likely true nonetheless. 170 million album sales later, the Beatles are still the zenith of rock and roll.

Though The Tonight Show had already run for years, and through two previous hosts (Steve Allen and Jack Paar), it was the re-named The Tonight Show With Johnny Carson that finally scored a truly historical hit with audiences everywhere. From McMahon’s opening, “Heeeeeeeere’s Johnny!” through the monologue, the golf swing, and beyond all the interviews, fantastic or insipid, it is Johnny Carson and Ed McMahon one remembers most as the kings of late night.

Premiering on the Discovery Chanel in January of 2003, Adam and Jamie hosted a show called The Mythbusters. Their entire shtick was to prove whether or not certain popular beliefs or internet rumors were true, or, in fact, myths. They created scale model builds, they ran tests, they blew so many things to bits, and through it all, they disproved a lot of what the general populous thought true. They were a force to be reckoned with. Well, for 13 seasons, anyway.

When one thinks of magic, one typically can’t help but think of Penn and Teller. One of the most iconic duos in the entertainment industry, and performing their own brand of comedic magic and theatrical stage shows since the late 70’s, the verbal and oratorial Penn Jillette and his silent, miming partner, Teller have put their personal mark on the industry forever.