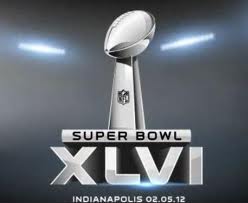 It’s Super Bowl week, which means writers, reporters and talking heads from every type of media outlet are looking for things to write about the game. If the past is any indication, 90% of the coverage will be on the same handful of predictable topics. Here is our list of the storylines you will be sick of long before kickoff.

It seems like only a few years ago that Tom Brady was merely a very good system quarterback who took advantage of a pass happy offense and stellar defense to win a few Super Bowls, only to suffer statistically in comparison to the Colts' Peyton Manning. Honestly, the argument had some validity as Brady won all three of his titles without putting up spectacular numbers. A few years (and a pair of Super Bowl trips) later and Brady is no longer being compared to Manning, but with the all-time greats in NFL history.

At least three writers have already tried to compare Brady to Joe Montana, and we can expect comparisons to Unitas, Elway and the rest of the greats to flow as we get closer to game time on Sunday. And if the Patriots win, Brady will likely top a lot of all-time QB lists by Monday morning, regardless of how plays in the game. 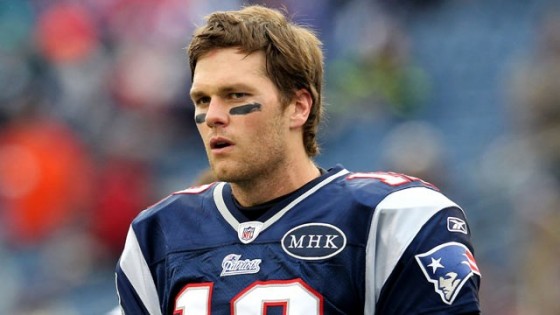 Rob Gronkowski is arguably the Patriots' biggest weapon on offense. He's a sure-handed tight end who can cause nightmares for opposing defensive coordinators. Unfortunately for the Patriots, he is dealing with an ankle injury suffered against the Ravens. Every Super Bowl there is one injury that everyone keeps talking about - this year it will be Gronk's ankle that John Clayton and the rest of ESPN's "Insiders" will be breathlessly updating us on. 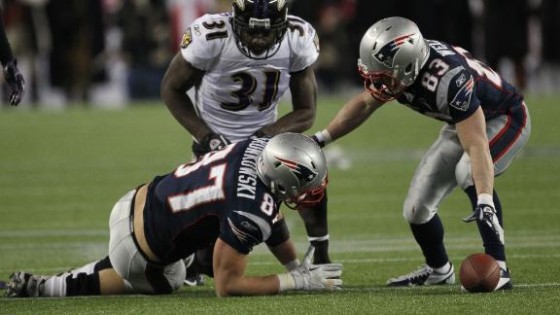 This one has already been beaten to near death during the playoffs, but with Eli Manning leading his Giants into his brother's home stadium for the Super Bowl, expect the talking heads to finish the job. The premise is simple: which Manning brother is the better quarterback if Eli wins his second title to big brother Peyton's single Lombardi Trophy? The argument is completely meaningless, as Peyton has better stats across the board, and Eli has benefited from playing with a far better defense than Peyton ever has. 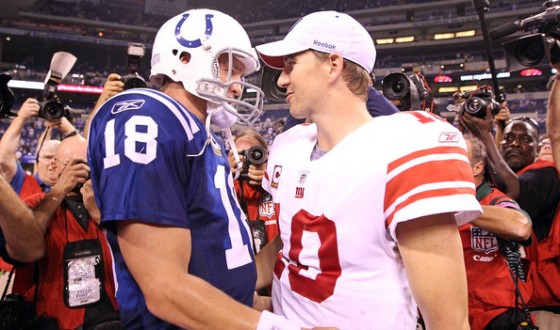 As far as the history between these teams go, only one game seems to matter to the press, and it isn't the Giants' midseason win this season. Though more than half the players and a number of coaches are no longer with their respective teams from the 2008 Super Bowl, this game is being billed as the Patriots chance at revenge for the Giants stunning comeback win to end the Pats' perfect '07 season. While it makes for a simple narrative, it's doubtful anyone in either locker room will spend much time thinking about a four-year-old game. 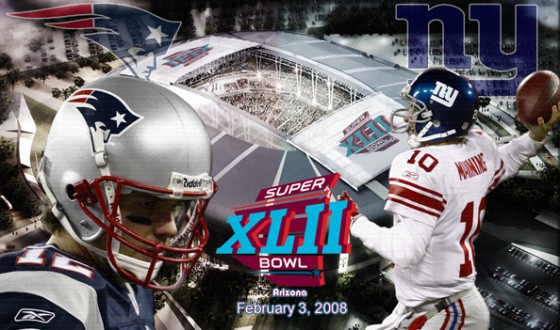 Part of the gathering of the press for the Super Bowl includes a gathering of sports talk stations from around the country on Radio Row. Any station with a big enough audience (and the budget to send a team) sets up in a large conference room in a local hotel to broadcast from the host city. The guests usually consist of three groups: NFL Hall of Famers looking to pitch a product or charity, national print/TV analysts, and beat reporters for the teams playing in the game.

This year, expect there to be an additional guest working his way around the room: Super Bowl XLII hero David Tyree, whose famous helmet catch propelled the Giants to victory. Out of football for two years, Tyree hasn't been thought of except for when he expresses his vocal opposition to gay marriage. That will change, as every show on Radio Row brings in the career special-teamer to provide his nonexistent insight into this year's championship matchup.

The Rovellization of the Super Bowl

We are going to name this one after CNBC (and former ESPN) reporter Darren Rovell, who manages to make every story about money and marketing. Anyone with the stomach to follow Rovell's Twitter account knows far more about the business side of sports than they ever wanted to; from ticket resale prices to the financial impact of the Sandusky case on Penn State. Look for mainstream reporters from every network to join Rovell in sucking all the fun out of the game by reducing every facet into dollars and cents. 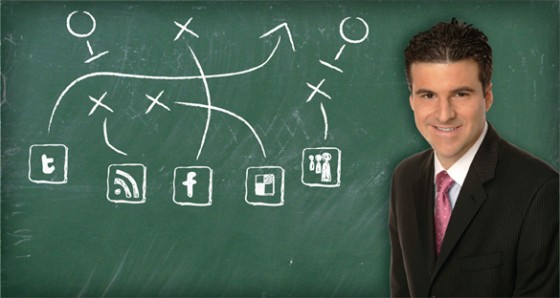 The NFL and their broadcast partners have played it safe with the halftime show ever since Janet Jackson's famous flash, choosing popular, controversy-free performers. This year they opted to do neither, picking the irrelevant Madonna and her history of outrageous acts. Most NFL fans greeted the news with a resounding "meh," but expect the media to hype her performance all week, especially with her appearance on American Idol on Thursday and her new single and movie being released Friday. In reality though, unless the 53-year-old former rock star does something crazy, expect Animal Planet's Puppy Bowl to break ratings records during the halftime show. 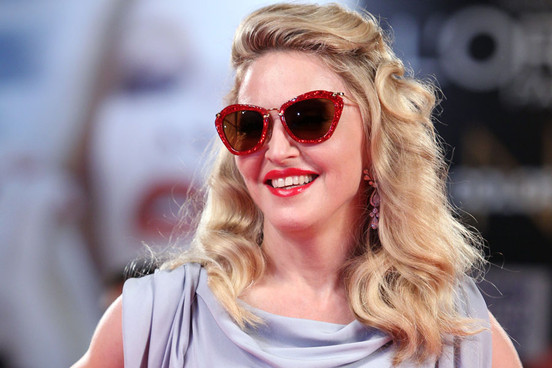 Peyton keeps popping up on this list, and for good reason. Not only is the Super Bowl being held in his home stadium, Lucas Oil Stadium, but he also has relationships with both quarterbacks and the future of his career is a major topic of conversation.

With an owner in Jim Irsay that craves attention, a potential replacement waiting to be drafted and significant question marks about his health, expect every football expert to weigh in with where they believe Manning will be next season. 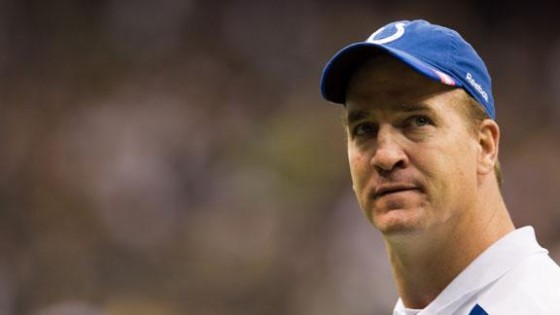 Outside of Mardi Gras and a Republican Presidential debate, nothing attracts the bizarre quite like the Super Bowl. With players and high-rollers taking over the club scene and the extra media glare, expect there to be at least one high-profile fight, arrest or DWI this week.

Additionally between now and game day, likely during Tuesday's official Media Day, someone will open their mouth and utter a statement so devoid of thought and common sense that every media outlet in the country will repeat it over and over. With media from around the world, including kids, models and professional trolls, the questions themselves will often dip into the inane and insane. 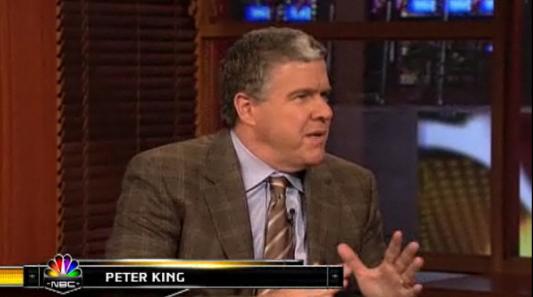 Most of the major football writers and reporters from around the country will descend upon the host city in the coming days. By Friday most of them will have run out of game stories to write and weigh in on the host city. Expect the comments to fall into one of four camps: 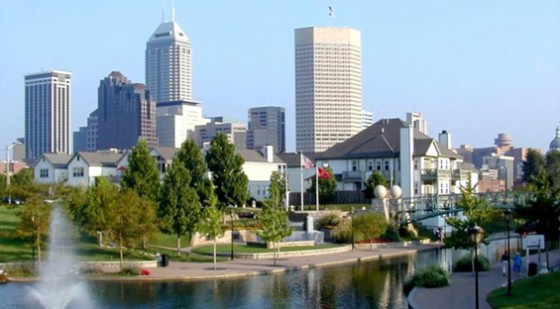 Few players without a criminal record have been as polarizing as the Broncos Tim Tebow was this year, and none have received as much coverage. Though his team was knocked out of the playoffs two rounds ago, Tebow will be talked about as much as almost every player in the Super Bowl. Expect at least a handful of reporters to compare Eli Manning and Brady to Tebow and at least one to do so unfavorably. That reporter, by the way, is a moron. 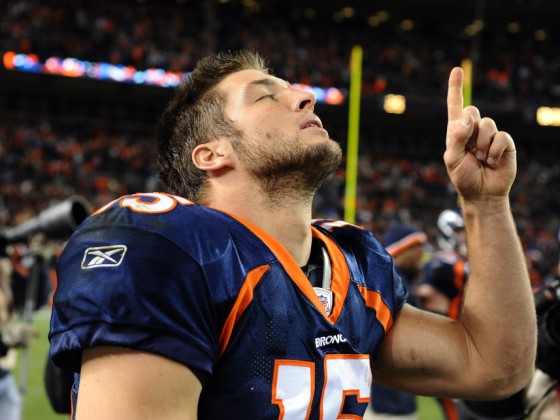