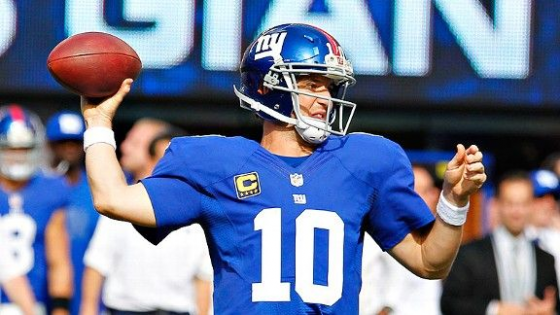 In Week 2 of the 2012 season, the New York Giants Eli Manning became just the 13th quarterback in 90 years of pro football to throw for over 500 yards in a game.

The NFL has been around since 1920, and the game of American football back then (and before, in its college origin days) was primarily a ground-and-pound sport dominated by running.

As time wore on, and with the rise of fleetier receivers, like the Green Bay Packers’ Don Hutson in the late 1930s and early 1940s, the game began to change. According to the Pro Football Hall of Fame, “Hutson invented modern pass receiving. He created Z-outs, buttonhooks, hook-and-gos, and a whole catalog of moves and fakes.”

Today, American football is a game dominated by the air assault, and it continues to evolve along those lines. As late as the 1980s, 1990s, 2000s and into this year, passing and receiving stats have gone through the roof. For example, eight of the top 10 all-time single-season passing leaders made their mark post-2004.

Who are these quarterbacks with the most explosive passing games in history? 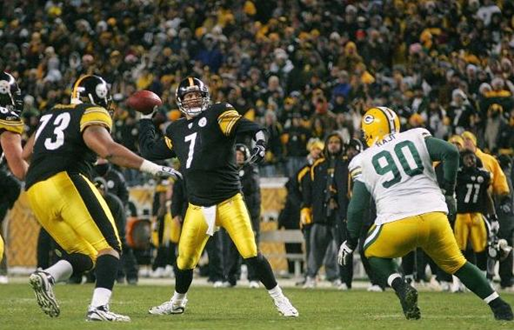 It was late December of 2009 and the 6-7 defending champion Pittsburgh Steelers’ season was on life support. They had begun the year 6-2, then lost their next five games in a row, before welcoming the up-and-coming Aaron Rodgers and the Green Bay Packers into Heinz Field on a cold Sunday afternoon.

The Steelers led 24-14 heading into the fourth quarter, but the Packers stormed back to take a 36-30 lead with just over two minutes to go.

Ben Roethlisberger then marched the Steelers 86 yards in 11 plays for the score and 37-36 win, and in the process cracked the 500-yard mark. Pittsburgh would go on to win out the rest of the season, finishing 9-7, but failed to make the playoffs. 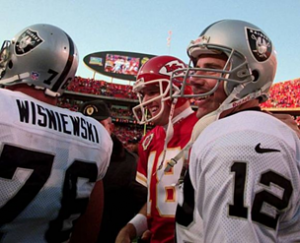 In November of 2000, things were looking up for a Kansas City Chiefs franchise that had failed to make the playoffs the previous two seasons. They were standing at 5-3, but faced a big challenge in Oakland against the 7-1 Raiders.

This would be the beginning of the end for any playoff run, though. Despite tossing for 504 passing yards, Elvis Grbac and the Chiefs could not overcome the Raiders 28-10 halftime lead. They lost by more than twice as many points, 49-21, to a quarterback, Rich Gannon, who threw for less than half Grbac’s mark (242 yards). The Chiefs would go on to lose five of the next seven games, finishing 7-9. 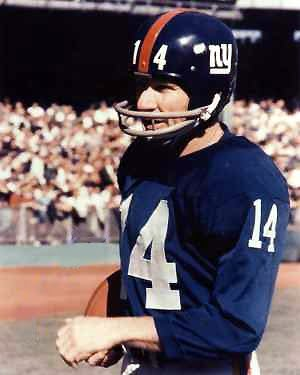 In 1962, the New York Giants were looking to avenge the previous year's Championship Game loss to the Green Bay Packers. They started off 4-2 before facing the Washington Redskins Halloween weekend at Yankee Stadium.

After the Redskins drew first blood in the first quarter, Y.A. Tittle led the Giants to back-to-back touchdowns and a lead they would never relinquish, ultimately winning 49-34. Tittle threw for seven touchdowns (tied for most in a game) and Del Shofner pulled in a whopping 269 of the QB’s 505 yards. The Giants would win out the rest of the season, finish 12-2, but lose again in the championship to the Green Bay Packers. 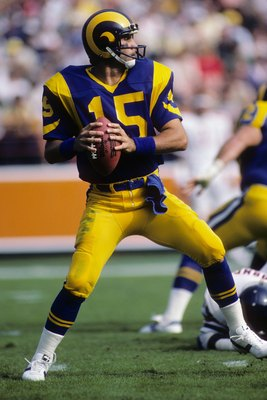 After the first two games of 1982, the L.A. Rams and the rest of the NFL hung it up for the next eight weeks thanks to a players strike. The season was cut to just nine games.

Playing from behind often induces a lot of throwing from the losing team, and that’s what happened here. Having a below average running game and a poor defense, as the Rams did in ’82, didn't help.

The Chicago Bears led from start to finish, forcing Rams quarterback Vince Ferragamo to chase all day. He threw for 509 yards, but never caught up when it counted. The Bears won 34-26. 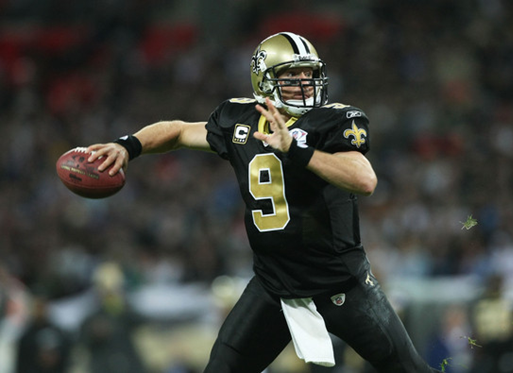 In March of 2006, Drew Brees signed a six-year deal with the New Orleans Saints after the San Diego Chargers signaled Philip Rivers was their quarterback of the future.

The Chargers would go 14-2 that upcoming season, but Brees would wind up leading the NFL in passing yards, and turned a sad Saints team that had gone 3-13 the previous year into a 10-6 postseason player. Along the way, he had this game: a 510-yard loss to the Cincinnati Bengals that put the Saints (6-4) newfound playoff aspirations in jeopardy.

Brees and the Saints won five of the next seven, and the Super Bowl three years later. The Chargers are still looking for their first.

The road to a repeat began rocky for the 2011 Super Bowl champion New York Giants after a surprising opening game loss to NFC East rival Dallas. 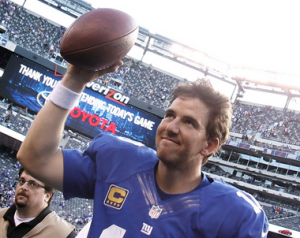 But the Giants would come back, and Eli would find his offensive rhythm, connecting for 295 yards and three TDs in the second half, and 25 points in the final quarter. A 50-yard bomb to Hakeem Nicks with under two minutes left in the game put Manning over the 500-yard mark. The Giants scored the winning TD on the next play.

As time goes on, fewer remember the laughing stock the New York Giants once were. Sure, the franchise was entrenched in NFL lore from the olden days, but between 1963 and 1983, they had only made it to the postseason a single time (1981). 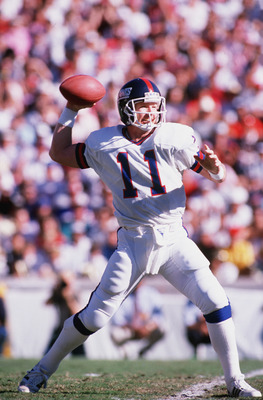 Then came Bill Parcells in 1983, and starting quarterback Scott Brunner’s trade to Denver before the 1984 season, which gave Phil Simms his chance. Big Blue recorded five of seven playoff berths after that, including two Super Bowls titles.

Both coach and QB were still unproven in 1985, having eked their way into the playoffs with a 9-7 record the year before. Now they stood at a shaky 3-2 to start the season.

It was mid-October and the Giants went to Cincinnati, looking to get on track. But the Bengals leaped to a 21-0 lead and held it, winning 35-30.

Simms, though, who had a rough start with Parcells and the fans, showed a little something on this day. In the waning minutes, he connected with George Adams for a 24-yard garbage TD that put Simms over the 500-yard mark. Then he, Parcells and the Giants would win 25 of the next 31 games, finishing atop the football world. 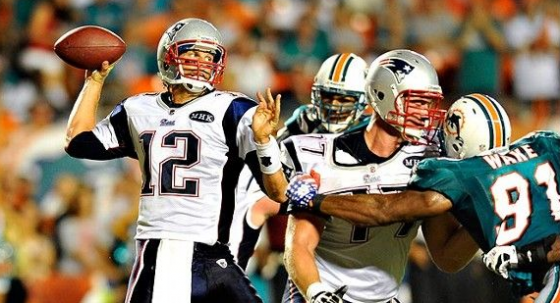 Bill Belichick pretends to play it close to the vest, but his lust for domination can’t help but cause a button to pop here and there. In their typical offensively grandiose fashion, Tom Brady and the New England Patriots put the league on notice with a gluttonous display in the first Monday night game of the 2011 season.

After taking a 14-7 lead against the Miami Dolphins in the first minute of the second quarter, the Patriots never trailed. In the fourth quarter, Brady connected with Wes Welker for the longest touchdown pass of his career – 99 yards – which put the QB over the 500-yard mark.

Brady went on to set his career mark in passing yards, 5,235, but he and the Pats would lose again to the New York Giants in the Super Bowl. 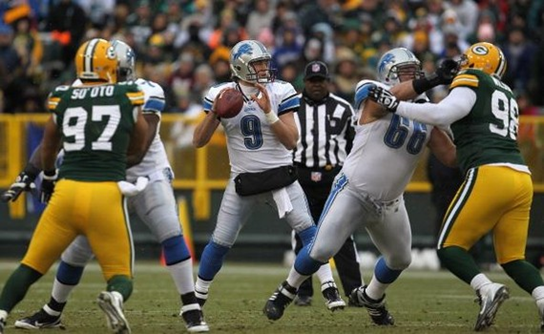 After ten years of absolute futility (all losing records totaling 39-121), the Detroit Lions posted a 10-6 postseason berth in 2011-12, due in no small part to the development of their 2009 No. 1 draft pick, quarterback Matt Stafford.

In total, Stafford was also a 5,000-yard passer last season, one of only five in the game’s history to hit that mark, and he breached it with an all-out air assault in the final game of the season against the 14-1 defending champion Green Bay Packers.

The Lions lost 45-41, but Detroit was already playoff bound for the first time since 1999 having clinched the week before, and Stafford had his team-record game and season passing numbers.

Miami Dolpins-New York Jets games are like boxes of chocolates. You never know what you’re going to get in these AFC East rivalry games, no matter how good or bad either team is. 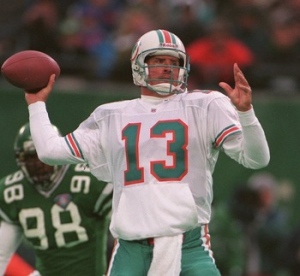 In 1988, both teams were not very good, but on this day in October, both had a little something to smile about. The Jets would destroy the hated Dolphins 44-30, and Dan Marino would set his career high for passing yards in a game with 521, playing catchup for most of the afternoon.

Neither team would make the postseason, though, and they'd finish the regular season next-to-last (Jets) and last (Dolphins) in the AFC East. 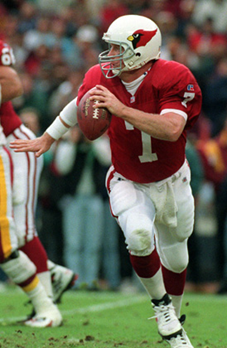 Boomer Esiason’s penultimate season found him in the sunshine suburbs of Arizona, where he would bust out with the most explosive game of his career – a thrilling come from behind win against NFC East rival Washington.

Down 27-13 at the end of three, Esiason threw for 252 yards in the fourth quarter alone. The Cardinals would finally tie it up at 34 on their final drive, with Boomer sitting at 423 yards. He tacked on another 99 yards in OT en route to a 37-34 win.

And he did it all without a single 100-yard receiver. Talk about spreading it around.

The Cards finished 7-9 that season, and as usual failed to make the playoffs. Since 1983, the Cardinals (St. Louis, Phoenix and Arizona) have made the postseason just three times. 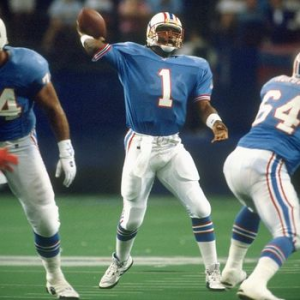 The top two 500-yard passers played for teams that no longer exist.

The AFC record holder for passing yards in a game is Warren Moon. Back in December of 1990, the future Hall of Famer threw 527 yards for the Houston Oilers, keeping the team’s playoff hopes alive by upsetting the Kansas City Chiefs 27-10. That’s also the most yards in a game since the AFL joined the NFL in 1970.

Moon would go on to lead the league in passing yards that season and collect the AP Offensive Player of the year award. The Oilers went on to make the playoffs at 9-7, thanks to this win and a final game win against the Pittsburgh Steelers, with whom they finished tied for the AFC Central lead.

Norm Van Brocklin is the NFL’s record-holder for most passing yards in a game – 554.

Van Brocklin was a part-timer fighting for the L.A. Rams starting QB spot in 1951. He started just two games and threw for only 1,725 yards that year, about a third of which came in this opening day game against another team that no longer exists, the New York Yanks.

Like Marino, Van Brocklin was ahead of his time, but having two of the best receivers ever in Elroy "Crazylegs" Hirsch and Tom Fears didn’t hurt either. The three eventual Hall of Famers joined forces on this day for 335 yards, and Van Brocklin still spread it around for another 219 on top of that.

The Rams, who had lost the championship the previous two years in a row, won this game and later that season seized their lone title. But it wasn’t Van Brocklin’s last. He went on to command the 1960 Philadelphia Eagles to the championship, becoming the only QB to win it all with two different teams.

For more great sports lists, check out Sports List of the Day.