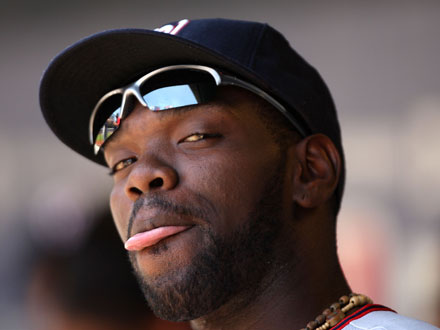 After a disappointing and controversial Major League Baseball career that lasted all of 240 games, the Elijah Dukes story just keeps on getting more bizarre.

Dukes appeared for the Tampa Bay Rays in 2007 before joining the Washington Nationals in 2008 and 2009 and was seemingly always performing beneath his potential. He left baseball after the 2009 seasons and found that his controversial career didn’t end when he hung up the cleats.

Now, Dukes is saying he was “blackballed” by Major League Baseball after he came forward saying that other players smuggled drugs on chartered flights and that he personally would smoke marijuana prior to games. He says there was plenty of pressure from other teammates (unnamed) that would smoke also, convincing Dukes to join in himself.

The admissions and claims don’t end there. This Tampa Bay Online article goes on to state that Dukes has also discusses the hardships of being an African America in Tampa and also talked about how he has been “thrown under the bus” by Major League Baseball due to the above claims. According to Dukes, this is why he doesn’t have a position in the game anymore. (We’re betting his poor numbers and poor attitude have nothing to do with it … )

Major League Baseball obviously refutes any claim that they are restricting Dukes or have “blackballed” Dukes as he claims.

So what is Dukes up to now that his playing days are over for the foreseeable future? Perhaps you should start referring to Dukes as “Fly Eli”, the latest rapper to try to break through the rap scene.