Celebrity endorsements are an interesting thing: on one hand they will almost certainly boost sales of the product or service in question. On the other hand the celebrity will most likely look back on the endorsement in their twilight years with a new found sense of shame and regret.

What is Phil Hartman’s best performance as an actor? Scholars and nerds alike will debate the topic until the end of days and through most of the Rapture. But you’re kind enough to have spent precious minutes of your life reading this article so I’ll give you the answer: it was Blasto. But his second best performance was actually for Activision’s Ice Hockey, thirty seconds of film more terrifying than Apocalypse Now.

A young, classy and not-at-all-a-corpse Phil enters his local hobby shop. He’s searching for his white whale: Ice Hockey by Activision. Of course, the shop-keep has it, but he can’t just sell it to Phil. No, that would be too easy. “Think you’re ready for it?” asks the shop-keep, knowing very well that the best sales pitch is one that questions the customer’s masculinity. Phil scoffs at this. Hell, it’s just a video game, like Ms. Pac Man or Pong. How many balls could it possibly bust? 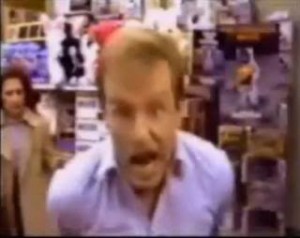 I LOVE HOCKEY SO DAMN MUCH

All of them, apparently. The shop-keep continues to warn Phil that this isn’t just Ice Hockey. It’s Ice Hockey by Activision. This shit’ll mess you up. He demonstrates by playing the game, pointing out that it’s just like real hockey if real hockey went straight to hell. Having been challenged by a complete stranger over a matter of no importance, Phil begins to freak out. As Hulkamania runs wild through him the innocent woman in the background suddenly begins to fear for her safety.

After watching the game for all of nine seconds Phil is foaming at the mouth. After bringing his customer to a crazy boil the shop-keep successfully sells the title despite permanently scarring another potential customer in the process. At this point we can only assume that after thrashing about the store like a rabid animal, Phil would quietly pay and leave before sitting in his car, contemplate his life and silently sob for half an hour. Sadly, the commercial ends too soon, leaving us to wonder what could have been had he not moved on to have an actual career.

Some would argue that Spider-Man isn’t a celebrity. To those people I would argue screw you, Spider-Man is awesome. Spider-Man is also one of the whiniest dudes in comic book history. It doesn’t matter what’s going on in his life: his girlfriend could be taken to an alternate dimension or Doctor Octopus could kidnap his aunt and force her into marriage for reasons I can’t really remember, and Perter Parker will take time out of his busy schedule of kissing ladies upside down to post sad poetry to his MySpace account. Despite this, he’s also borderline invincible. He’s thwarted everyone from Macho Man Randy Savage and Topher Grace to the terror that is hunger (with the help of Hostess Fruit Pies, of course). Given this impressive resume you may be a bit disappointed to learn that all it takes to outwit Peter Parker is an Atari and about thirty seconds of spare time.

Spider-Man’s downfall begins when The Green Goblin leaps onto a New York city rooftop. Logic would dictate that anyone who could make such a jump without the aid of a complex pulley-lever system could beat down any angst-ridden teenager regardless of web slinging capabilities, but that is apparently not the case. Anyway, after making this terrifying entrance, he informs Spider-Man that he’s placed time-bombs through out the city. He then proceeds to laugh like a coked-out hyena before the camera reveals that Spider-Man is playing his own video game and the city the Goblin was referring to is actually part of the game. Programming a terrible game isn’t actually a crime, but laws be damned, Spider-Man will stop this plot most foul! 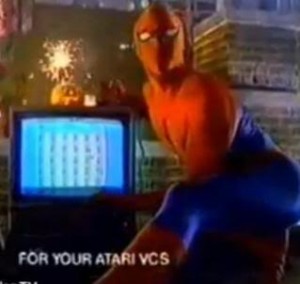 “This is worse than six Venoms!”

As the Web-Slinger feels the pressure of saving those non-existent citizens from a non-existent threat, the Goblin continues to ruthlessly taunt him while conveniently describing game play for any passer-by that may be watching the situation unfold.. Also, the fuse on his pumpkin bomb seems to get shorter and longer between shots. Indeed, continuity in comics means nothing anymore. Their back and forth continues for a brief moment before the pressure of playing his own game cracks Spider-Man like a farm-fresh egg. Having successfully gotten under his advisery’s skin the Green Goblin takes off, perhaps to plant bombs in Super Mario Bros. He also leaves a bomb on top of the T.V., but Spidey’s too busy complaining to notice.

Sometimes the best way to sell something is to blow your audiences’ minds with as much star power as possible within a thirty second period, and with that in mind Atari treated us with a double feature.

First up is baseball legend Pete Rose. To be honest, I’m not much of sports fan but I could tell Rose was a baseball player by detecting two tell-tale clues: he’s holding a bat and is wearing a single glove but not singing Thriller. As Rose prepares to hit a dinger he challenges his foe, an Atari, to throw his best pitch. Again, to be honest, I’m not much of a doctor, but I can tell that Rose is suffering from some sort of head trauma because he challenged a poorly-made electronic device to throw a baseball as fast as it could, a demand that can only end in disappointment for all parties involved. 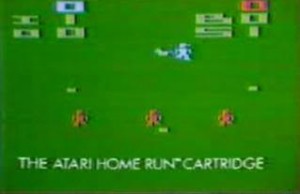 The camera then cuts to some footage of an Atari baseball game, wherein a blue guy throws a rectangle before teleporting away. Then, three red dudes river dance. An umpire then pops out from behind the television to inform Rose that he’s out. It’s odd that a television would need an umpire but if your aim is so terrible that an inanimate object can manage to strike you out with a spitball, it’s probably for the best. 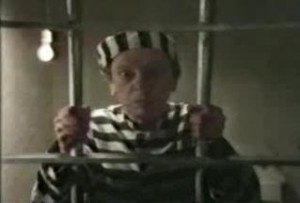 “And when you gaze for a long time into the abyss, the abyss also gazes into you.”

Act two presents us with a much more grim scenario. Lovable scamp and world-renowned old guy Don Knotts has been incarcerated for his crimes against his young and sexy tenants. What landed him in prison is never really elaborated on so my assumption may be way off base, but I’ve seen enough episodes of Three’s Company to know that he’s clearly off his rocker. Gripping the bars, he delivers his only line of the ad, a threat to the one who brought him to justice: “You can’t keep me in here, Atari.” He then proceeds to stare into your very soul, longing for the freedom that was taken from him.

After some Breakout footage Knotts manages to escape through an unexplained hole in his wall. Given that this takes place in a universe where Pete Rose is a worse batter than gambler and Don Knotts is a convicted felon, chances are he simply punched through the wall with the raw fury of ten-thousand men. It’s a scary world that Atari lives in.