Sports > Other > Erin Andrews on Oprah

Erin Andrews of ESPN will appear on Oprah on September 11th according to Richard Deitsch at Sports Illustrated. In a Tweet just moments ago, he stated :

Just learned that ESPN’s Erin Andrews will appear on The Oprah Winfrey Show on Sept. 11. Show was taped last week.

Erin will no doubt be discussing her ordeal related to the peephole video which was released on the internet, and the subsequent pressure she has been under from the media. She recently appeared in GQ magazine, in a photo shoot which took place before the peephole video scandal broke, however after that video first appeared online.

In Deitsch’s follow-up article, he states :

The segment was taped last week and will be the only in-depth interview Andrews gives on the subject.

Deadspin had previously predicted that this would happen, stating on August 6th that : 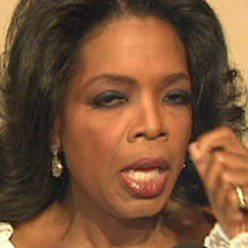 Oprah. Larry King. Diane Sawyer. Katie Couric. According to one snitch/source, these are some of the heavy-hitters jockeying for the exclusive EA post-peephole heart-to-heart sit-down.

and then the follow-up comments from her lawyer:

“Erin Andrews has not committed to any on-air interviews. She has received and declined all invitations to do so. She is not in negotiations with any media to do so. mg”

I guess Oprah had to bid higher. So we created the image below as a start to a Photoshop contest, but then the AP went and released a photo of the actual appearance, thus making the contest even more silly than it originally was: 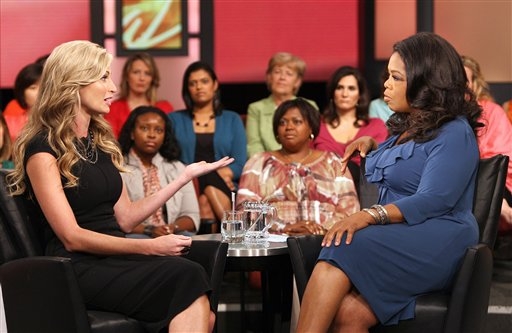 ** UPDATE ** The Chicago Tribune has additional information and quotes:

ESPN college football sideline reporter Erin Andrews tells talk-show host Oprah Winfrey that having secretly videotaped nude footage of her distributed on the Internet was a “nightmare.” Winfrey’s interview with Andrews will air Friday, Sept. 11, as part of a “Summer Headlines” show that previews the 24th season of “The Oprah Winfrey Show.” Andrews also tells Winfrey she “opened up the computer (and) could feel my heart pounding.”

Andrews’ attorney has said the blurry five-minute video was shot at a hotel without her knowledge and she plans to seek criminal charges and file lawsuits against whoever shot the video and anyone who publishes it. The reporter also says she’s excited to get back to work this fall, adding “it’s really going to help me heal my wounds.”