Damn you ESPN. After falling victim to far too many gaming addictions over the years, I had successfully navigated the cesspool that is Facebook, only to be snared by a commercial running during my beloved SportsCenter. The game I speak of is ESPNU College Town, which has recently launched. Think “Sim City” or “Roller Coaster Tycoon” but the goal is to create a successful college campus. Okay, really it’s probably more similar to Farmville, but I haven’t actually played that game, so I’m going to go with much more dated references.

So there I am catching up on the news, doing site research and such (I call it work, and the wife hasn’t figured it out yet) and a commercial comes on my television. “Be the Dean” it says, or something to that effect. Hmmm, a new sports computer game on Facebook sponsored by ESPN? ‘This seems like a fairly interesting topic for a future article’, I think to myself. And boom, like that, I have a new addiction. Three fucking hours later, I’ve come to the conclusion that I knew before I started, I need to turn this shit off before it’s too late. 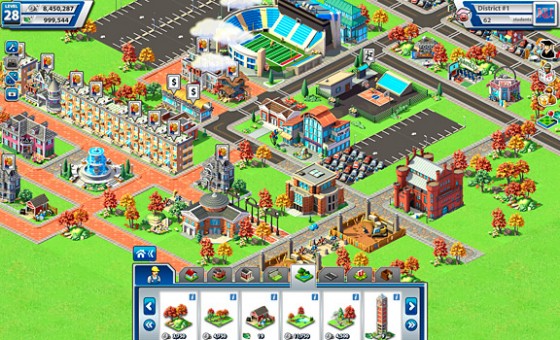 Jim Caple recently wrote about this new game on his Page 2 column (I’m sure the topic for the column was totally of his own choosing) :

Pure genius, and Pure EVIL. Now the screen-shot above came from the ESPN article, because my campus isn’t nearly as developed as Caple’s apparently. Dude must have all kinds of free time. Level 28? Fuck him. Below is a screen-shot of my weak-ass school, created purely for the purposes of this article, I swear. Once I am done writing, I will figure out how to delete this plague from my Facebook account before I lose anymore of my life. Don’t say I didn’t warn you. 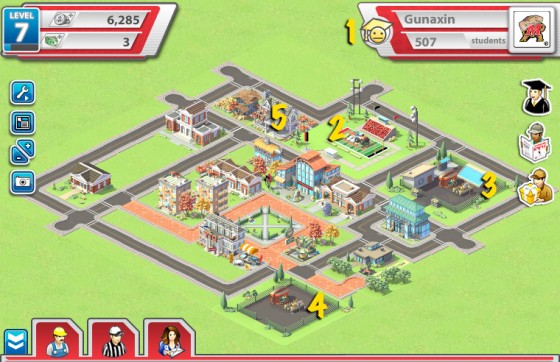 Building roads was free, so I went nuts!

Below are a few observations, as numbered in the image above. Some of the terms I use may not be accurate to the actual game. I don’t care enough to actually look up what everything is called:

Whoa, that is way too much already. I didn’t even get to the part where you recruit players, and apparently pay them money to play sports for you.

A relatively low-level basketball player costs more than an education department? No wonder teachers get paid so little in real life, they do nothing to generate revenue! This game has taught me so much. I have many more insights I could share with you, but I think it would be safer to just end this article here, and never speak of this game again. 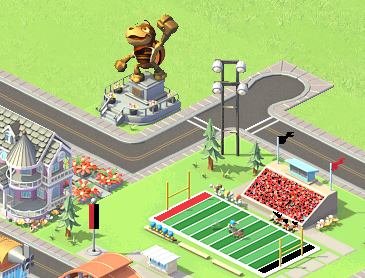