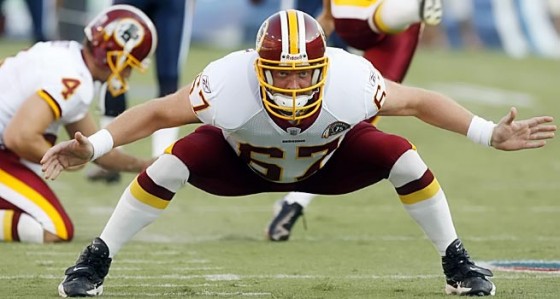 In honor of the 25th Anniversary of Madden Football, and its release today on Madden Day, we thought we’d take a look at the funniest bit of Madden related goodness in that 25 year history. This classic letter was written by a now defunct sports blog, The Phat Phree. The premise of course is that it was written to John Madden from Redskins’ long-snapper, Ethan Albright. Albright, known as “The Red Snapper”, was a relatively successful NFL player, appearing in 236 NFL games. However Ethan’s biggest claim to fame is for something he didn’t even do, laying the smack down to John Madden for his terrible ratings in the game. Below we present the unedited (NSFW Language) pieces of internet legend from 2007:

To: John Madden
CC: Electronic Arts Sports
From: Ethan Albright
Re: Being the worst rated player on Madden ‘07

Hi, John, my name is Ethan Albright. I play line for the Washington Redskins. You probably already knew that, so I’ll continue. I am writing in regards to the overall player rating of 53 that I have received in Madden NFL Football 2007. I feel that this is fucking bullshit and you should kiss my mother-fucking ass. Ahmed Carroll was rated a 78 and the Packers just cut his ass on a Tuesday morning after his performance in a Monday night game. That is pretty terrible. The worst part is that his overall rating was sniffing 80.

You know what, John? Two can play this game. I rate you a fucking 12. I rate you a fucking 12 in Ethan Albright Football 2000-ever… except for in the category of ball-licking. That is where I will spot you a 98 rating. You will receive this score because I will never give your blubbery ass a 99 in any category. Take that, pencil-dick. Go do Al Micheals or something. Boom.

It’s also pretty wonderful that my awareness rating was 59. You make it sound like I wake up in the morning, helplessly shit and piss myself, then lose three of my teeth before I discover that I am trying to eat a rock for breakfast. Fuck, John, I understand you saying that I am slow and lacking athleticism, but a rating like this pretty much labels me as retarded. Rod “He Hate Me” Smart has a 52 in this category. Electronic Arts is saying that seven rating points separate me and the breathing embodiment of the perfect oxymoron. Rod Smart struggled to arrange words in sentence form. Cave men had better hold of the English language. The only actions that separate point values of ignorance at this embarrassing level are things like using your own toothbrush to wipe your ass. I basically edged out Rod by my lack of shit teeth. If I take a night school class, could you bump me up to a 60?

I have received the impression that you feel that I am lacking in the agility category. I should consider a walk through my living room where I don’t crash through a wall or kick over furniture a resounding success. My agility rating on your game is 33. It makes it sound like I just topple over if I start walking too fast. Ted Washington is rated a 40 in agility. He is listed at 365 pounds. If Ted Washington tied a white lady up and made her wear a metal bikini, he’d look just like Jabba the Hut.

John, you are such a fucking dick. I also noticed that my kick return rating was a 0. I was rated a fucking zero? So you feel that I shouldn’t even receive a 10, or even a 5? You are pretty much saying that I couldn’t even fall forward on a ball kicked in my direction. I would just stand there and let the ball bounce off of my fucking face. Fuck that, John, I returned an onside kick 6 yards in 2002. You should have just slapped a – 4 on me and had the EA staff ambush me with paintball guns.

Finally, I would like to comment on an unlikely topic, my pass coverage ratings. I see that I am better at man-to-man coverage (31) than zone (21). Fuck me sideways with a lunchbox. Where did these scores even come from? How much time is spent coming up with the pass coverage ratings of offensive lineman? Can I have that job? Let’s see here, I think that Orlando Pace would be slightly better at jumping intermediate routes than Larry Allen. While I’m at it, I can assign the passing ratings for offensive lineman as well. I can use mine as a guide.

I was rated with a throwing power of 17 and accuracy of 16. Orlando Pace has a 22 power and 17 accuracy rating. Did someone at EA really put time into figuring out that Orlando Pace edges out Ethan Albright in both throwing power and accuracy? I will challenge him any day. My horrible passer ratings are of greatest misfortune to my son, Red Beard Jr. The poor boy is not only hideously ugly and covered by freakishly large freckles. He also has to suffer through playing catch with me and my senile-elderly-woman-type passer ratings. A session of tossing the pigskin usually consists of me missing my son by thirty yards in sporadic directions. I led him in front of a fire truck once and my wife kicked my ass. This is because of my 76 toughness rating. Yes, a 76 is far better than the other ratings, but I’m a fucking lineman, damn it. NFL Linemen are considered to be synonymous with toughness. According to your game, I am a retarded, uncoordinated, pussy-ass fuckwad that can’t fall on a kickoff, throw, or spell. I am, however, slightly better at manning up on a receiver than dropping into zone coverage. You lose your mind more and more each year, old man.

Fuck you, John. Please expect to find red pubes in various meals you consume for the rest of your life. If you fuck with Ethan Albright, you call down the thunder.