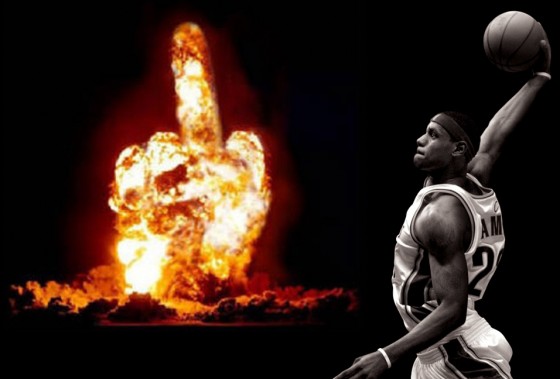 You don’t have to look to hard to prove it… everybody hates LeBron James.

The reasons are multiple yet they are the same. LeBron has come to represent everything the common man hates about the offensively rich and entitled athletes of professional sports today… boasting the ego to do whatever he wants, whenever he wants, and touting the bank not to care. He left Cleveland in the wind after falling short of expectation and now they are left to stew in their own basketball misery as LeBron and his new BFF’s play in the sand of South Beach.

He pissed on the blue-collar worker to hang out with fellow celebrities on a permanent vacation.

It doesn’t matter if you live in Cleveland, New York, Chicago, Los Angeles, or Dallas. The hatred of LeBron James is transcendent. It knows no barriers or restrictions. The fans of basketball (and many who aren’t) have deemed LeBron a blight to society.

We despise him, we ridicule him, we boo him, we make fun of him… but more than anything, we post videos on YouTube about him.

A local Cleveland video went viral, picked up by the none other than TMZ and shared with the world (probably the most popular spoof of The Decison available).

Jay-Z and John Mayer couldn’t resist the temptation to jump on the bandwagon. I’m betting this got Mayer on “The List”… but I doubt he has the balls to fuck wit’ Jigga. Please.

This was made by Steve Carell and Paul Rudd (if you don’t know, get online and download “The 40-Year-Old Virgin”… and for the love of GOD, please join us in the regular world) for ESPN, aired during the ESPY Awards. Word is LeBron didn’t care for it. Word also is no one gives a shit… if you aren’t puckered up to his mushroom tip, chances are LeBron won’t like you. He’s an asshole. That’s how he works.

Even Muppet Kobe got in on the act (kind of… this MAY have been altered. I cannot confirm nor deny.)

Those awkward cartoons used in commercials plugging the HTC Evo phone against the iPhone4… they had their own version of The Decision as well.

Dan Patrick and the Danettes took advantage of the opportunity to create this spliff of their own humor for your entertainment. I believe its one of the better spots on the list… but I’m a biased fan of the show.

Michelle Beadles from ESPN SportsNation and her take on The Decision… not bad. I want to know if Michelle is rated to Zane, an offensive linemen taken by the Denver Broncos in last year’s NFL Draft (and a true difference maker for that offense… as much difference as he could make considering the season they had). I’ve tweeted her several times to ask and the bitch won’t answer, so fuck her.

They should give that job to Katelynn Johnson.

You KNOW South Park had to get in on the action, and they may have done it best.

And those are just our ten favorites. The stream of ridicule is endless, and while many are worthy of the time spent watching, the best may come from a fellow NBA baller.

Anthony Tolliver, center for the Minnesota Timberwolves, teaching us all to take LeBron a little less seriously…

… too bad LeBron isn’t capable of learning the lesson himself.

(I just hope this doesn’t prove to be the crowing achievement of Tolliver’s career… but if it is, at least I’ll remember it.)