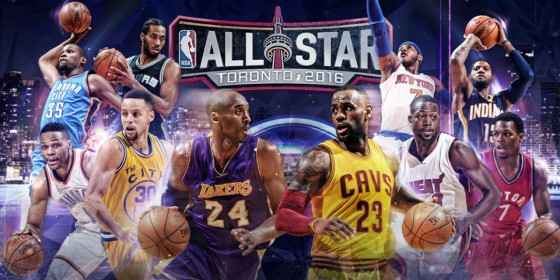 On Sunday February 14th, cupid is going to be busy flying around the country helping guys and girls find love for Valentine’s Day. But for the NBA fans out there, it is not Valentine’s Day, it is All-Star Sunday. The 65th NBA All-Star game will feature the best of the Western and Eastern Conferences squaring off in Toronto, Canada. It will be the first time the All-Star game was hosted outside of the United States.

Both rosters will feature two first time All-Stars, one of which will be starting for the Western Conference. Kawhi Leonard finally got respect and is going to start his first of many more games. The other three first time All-Stars are Isaiah Thomas, Draymond Green, and Andre Drummond. It will also be Kobe Bryant’s last All-Star game, but will it be an exciting one? Only time will tell, but as we await tip-off, let’s take a look back at some of the best All-Star games in NBA history.

Lebron James went 6-for-8 from outside the arc to finish with 36 points in a very close game down in Orlando, Florida. D-Wade had a chance to tie the game but missed a 3-pointer as time expired.

In a close game, Larry Bird turned in one of his all-time greatest performances scoring 12 of his 19 points in the game’s final six minutes. He added 12 rebounds and hit a game-changing shot with four minutes remaining.

Before the Bulls won 6 NBA championships, Michael Jordan was just another player that the entire league was talking about but had no idea what he was capable of. He exploded for 40 points in a game that many people believe was the moment the NBA realized that he was the future. He added 8 rebounds, 4 steals, and 3 assists before being named the MVP.

Dominique Wilkins had a quiet 29 points behind MJ’s big game making the two biggest names of the next couple seasons a combined 69 points. It was the only time these two players lead the team in scoring for an All-Star game. And it was incredible.

In only 23 minutes, Larry Bird, a rookie, made his mark scoring 7 points (5 in OT), 6 rebounds, and 7 assists. He, along with Moses Malone, led the East in OT after nearly losing in regulation. It was the debut of the 3-point shot and Mr.Bird became the first player in NBA history to make one. George Gervin added 34 to be named MVP after dropping 18 in the 3rd quarter alone.

Michael Jordan’s final All-Star game was almost exactly what the NBA ordered when he hit what would have been the game-winning shot with only 5 seconds to go but a last second foul sent Kobe Bryant to the free throw line to shoot three free throws. After missing one, the game went into the second OT where Kevin Garnett took over and finished with a game-high 37 points.

As the clock hit 0:00, Paul Westphal was the hero of the game having knocked the ball away from Pete Maravich just seconds before the final game-winning shot was taken. The steal secured the win for the West. The fans of the game will only tell you about one play, when Dr.J dunked on Kareem Abdul-Jabbar in an iconic slam.

It always seems that the hometown heroes are usually the ones that perform at their best. Such was the case when John Stockton and Karl Malone took the West to an exciting OT win leading to the second time two players shared the MVP award. Also impressive was Mark Price hitting 6 three-pointers from outside, an All-Star game record.

As usual, both teams came alive in the final quarter which featured several players scoring double digits including Chauncey Billups who had 14 points to lead the East to another All-Star game win. Dwyane Wade finished with 28 points, 11 assists, 6 rebounds, and 5 steals to claim the MVP. His 18 second half points were another reason he won that award.

With 28 seconds remaining, Stephon Marbury, after exchanging consecutive three point baskets with Kobe Bryant, nailed the final made shot of the game giving the East a come from behind win. But it was Allen Iverson scoring 15 points in the final nine minutes that led to the eventual victory. His leadership and complete control of the East helped showcase his ability to be a team player. The East reminded the fans that they are much stronger than the media is declaring.

After Ralph Sampson had to withdraw following a late season injury, the Western Conference went with Tom Chambers as his replacement. He was picked over Xavier McDaniel (22.6 ppg, 8.9 rpg, 1.3 spg) and Dale Ellis (23.9 ppg, 5.6 rpg, 2.7 apg) as the host cities hometown hero.

He didn’t disappoint as he dropped 34 points and added 4 rebounds, 4 steals, and 2 assists and turned into a crowd pleasing MVP in one of the most unlikely candidates in a game featuring 14 future Hall of Famers. He was also the first and only replacement player to win the MVP award. If you don’t believe in miracles, you did not see this one, it was more than worth the 3 hours.