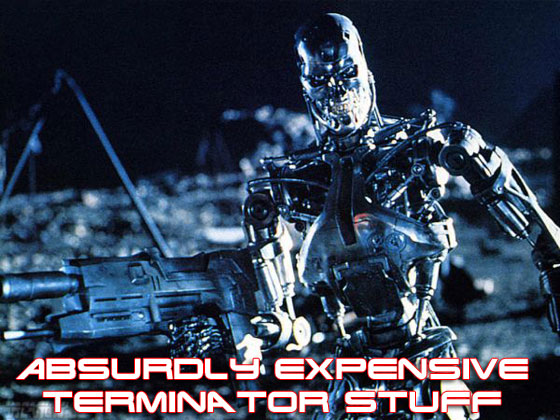 Like Star Wars and Lord of the Rings, Terminator is another movie franchise that has a following of nerds with disposable income. Therefore, companies produce high-quality, high-priced merchandise. Sideshow Collectibles, which specializes in making such products, has outdone themselves with the T-800 stuff in particular, creating everything from a full-sized T-800 to a must-have Sarah Connor figure.

First and foremost, here is the ultimate of all Terminator knickknacks. It’s the life-size T-800 Endoskeleton, which measures more than six feet high. It’s only $5950.00, but might be difficult to find because it’s sold out. However, check eBay because some people find themselves needing to unload this from their collection.

Too cheap to buy the 1:1 scale version of the Terminator? Then settle for this 1:2 scale, all three feet of him. Oh, scary, a three foot Terminator! This originally costs $1999.00.

Now we’re talking. A life-sized bust of Arnold with half a head. This dude is 21 inches high. I’m not too impressed with this one as his face doesn’t look real enough. I’ll spend my $549.99 elsewhere.

If you don’t like Arnold, then here’s one with his skin completely ripped off. This on is only 13 inches high and $499.99. That means Arnold’s skin is worth $50.

This is the hottest Sarah Connor figure available, but unfortunately it’s not really her – it’s the T-1000 in disguise. So if you get rid of the Robert Patrick head and accessories, you can pretend it’s the real Connor. It’s a very reasonable $149.99.

Now this is the real Connor, but unfortunately it’s the one that more resembles the one that James Cameron divorced instead of the hottie that the T-1000 becomes. $149.99.

There is also a bunch of John Connor stuff available, but who would want that?