Every now and then, we all run across an image online that makes us think, “WTF?!?” You know the ones we’re talking about.  Kind of like this: 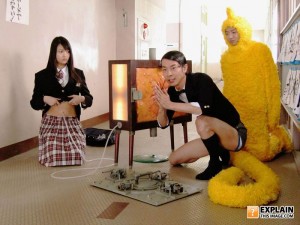 Unfortunately, we’ll probably never know the true story behind the internet pictures that have been making us laugh and cringe for years.  That doesn’t stop us from making up our own explanations, however, and some of them are even better than the truth.  And now there’s an entire website devoted to doing just that.  ExplainThisImage.com has hundreds of WTF pictures submitted by readers, and gives you the chance to take a stab at what happened in the moments before and after the photo was snapped.

So, take a look at these pictures from ExplainThisImage.com, then head over there and let everybody know what you believe the true story is behind them!