In case you’ve lived under a rock for the majority of your life, Scrabble is the word game your parents likely make you play at Christmas time. We’re not saying it’s boring, but the fact you can’t score points for swear words is something that needs to be addressed. Recently EA (Electronic Arts) took control of the app version of the game and decided to implement a few changes to make the game more accessible, causing fans of the game to protest them on Facebook. Seriously. 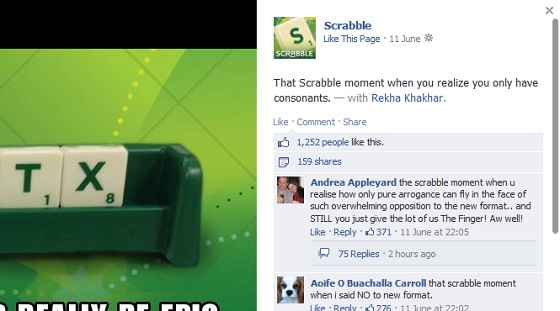 So what are these changes? Well, EA had the audacity to dare change the dictionary the game uses from the Chambers dictionary to the Collins dictionary. If your mind is quietly ticking away trying to discover why you should give a fuck, we’ll wait. Yeah, we couldn’t think of why either, since both of them are books that list words. Along with this EA also implemented the ability to play the game in multiple languages. Which of course caused people to foam at the mouth because why would dirty foreigners want to play one of the world’s most popular board games? What is EA doing? Trying to make money?

“Why can’t everyone on Earth speak English, like me?”

These changes have caused so much anger in fans that literally every post on the game’s official Facebook page is mobbed by people demanding that EA give them the old version back. Because yelling at people on the internet is the best way to get everything.

Man, that baby is pissed.

Not only is this insanely retarded, since EA and Mattel have both openly admitted that what these complainers want is impossible, but EA has reported that the game has seen a huge boost in sales. This means that these disgruntled players are literally demanding that EA restore a version of the game (that no longer exists) that fewer people wanted to play. Wait, aren’t scrabble players usually smart? 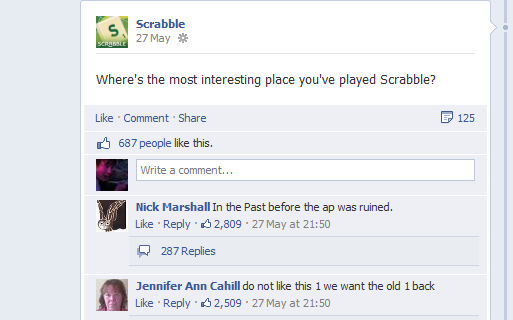 If you can’t spell the word, “app” Nick, you probably weren’t that great at Scrabble.

Another thing people are pissed about is the fact that all of their previous records at the game have been deleted, permanently. This of course means that if they complain hard enough EA can magically reach through time and restore them all. We’ll be honest, a record that shows that you’ve played 5000 games of Scrabble on the toilet is something you should want deleted. 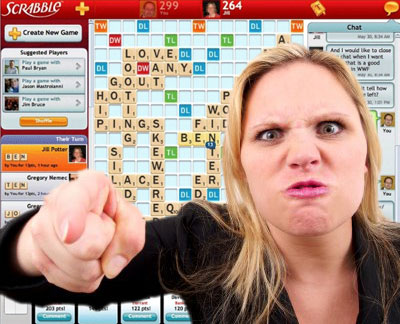 Look, we know that video games are awesome, hey we’d be pretty pissed if all of our high scores on Ape Escape were deleted, but come on. If you’re honestly so pissed about an iPhone app the BBC reports it, you should probably go outside or something.

Then again, we wouldn’t have gold like this if they didn’t complain.

We don’t even know which one of these to make fun of.