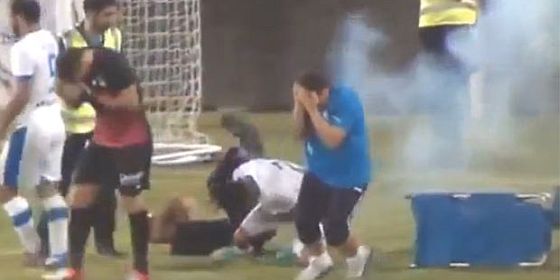 When first place Anorthosis FC hosted Omonia Nicosia this weekend in a Cypriot First Division match fireworks were expected, but apparently one fan took that hope literally. When trainers came on the field to tend to Columbian forward Ricardo Laborde of Anorthosis, a fan lobbed a well aimed explosive at the huddle of players, trainers and officials.

In the video you can see that the trainers didn’t notice the firecracker immediately, and started moving too late before it exploded. In a scary scene, the explosive detonated, leaving players and trainers writhing in pain and covering their eyes and ears.

While American athletes have had to deal with bottles, batteries and snowballs, at least our fans stateside haven’t resorted to flares and fireworks. We hope Philadelphia fans aren’t taking notice.