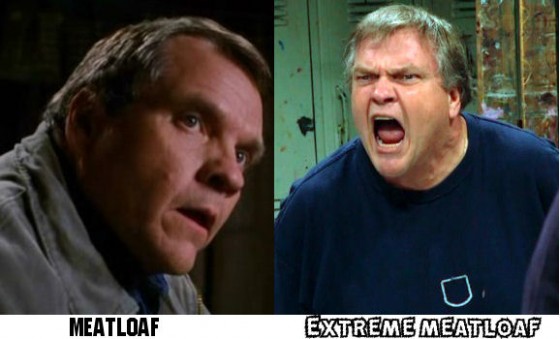 He would do anything for loaf, but he won’t do that.

After some poor life decisions and a few bottles of dollar store wine, (ok, it was rubbing alcohol and sterno) we stumbled across a thing known as “extreme” meatloaf. Who knew?

Apparently, the idea behind extreme meatloaf is to fool kids into believing that a hunk of ground beef and tomato ketchup is the culinary equivalent of putting Superman in a rear naked choke-hold while boning his girlfriend to a soundtrack composed by AC/DC and The Wiggles.

The sad fact of the matter is, meatloaf is meatloaf. If there are two words in the English language to don’t belong together for any reason, those words are “meatloaf” and “extreme”. That’s like calling vanilla ice cream a trip to flavor town on a raging red rocket of radical! (dude)

Either way you go, Extreme Meatloaf is a thing that somehow exists. You’re welcome.

This meat loafed way too long.

This recipe was adapted by Annie from Food Network chef, Tyler Florence. We’re desperately trying to figure out why.

This recipe forgoes the usual meat, egg, breadcrumb and ketchup route for such INSANELY EXTREME flavors such as those found in zucchini, yellow pepper, and Parmesan cheese. Did you catch that? Now, it’s more than a meatloaf, it’s a goddamned party in your mouth!

Zucchini tastes like cardboard and lawn clippings. Yellow peppers are fine, until you cook the shit out of them, and Parmesan cheese? If it’s the stuff in the can, you may as well put dandruff in there.

The only thing more extreme than this is watching the elderly compete in a heated round of Wii Bowling. You better take it easy when you dig into this culinary masterpiece.

Paula Dean offers up this culinary delight. And when you think EXTREME, you undoubtedly think of an aging Southern woman who believes a stick of butter is the closest thing to Utopia that can be found on this Earth.

In her recipe, we’re adding bacon crumbles, cheddar cheese and, wait for it, MAYONNAISE! If you can’t feel your arteries already beginning to clog up, you might be dead inside. And if you eat this abomination of greasy fat, you soon will be dead inside.

In fact, the only extreme element to this recipe is the extreme amount of time you’re going to spend on the toilet after all that oil and grease wreaks havoc on your bowels after you choke down a few unhealthy slices.

It almost seems as if Paula was trying to create a beef based colon cleanser, and instead turned it into dinner.

Apparently another pair of Food Network cooks were making the media rounds and brought with them this abomination of a meatloaf recipe to share with Anderson Cooper’s viewing audience.

Ground turkey instead of beef? You have GOT to be kidding. Meatloaf by its very definition is supposed to be bad for you. Trying to make it healthy is an exercise in futility, much like trying to teach a pig to sing. It won’t work, and you wind up simply wasting your time and annoying the pig. In this metaphor, you’re the pig.

The Neely’s recipe includes such outrageous flavors as Old Bay seasoning. The stuff you put on steamed shrimp and crabs. That’s going to be an extreme flavor conflict when you add their BBQ sauce to the mix. A BBQ sauce that includes sugar.

Now, we can’t speak for you, but there’s no way in Hell that we’re going to dip our steamed shrimp into a jar of maple syrup before eating them. And that’s exactly what this is going to taste like when you bite into their faux-loaf. The meatloaf is a lie!

The last thing you’ll see before they break out the paddles.

If ever there was a recipe that called for “whatever the fuck you have available”, this is it. The selling point is that it’s going to give you a heart attack. That’s marketing 101, folks.

This meatloaf is so extreme you’re going to rampage through the city naked, screaming obscenities about the Presbyterian Church while you frantically try to get to the Emergency Room and schedule a stomach pump.

What’s in it, you ask? Why, are you a Masochist? We’re nothing if not willing to indulge your perversions here at Gunaxin.

It contains: 2 pounds of ground beef, 2 links of smoked sausage, 20 strips of bacon, A1 steak sauce, OATMEAL(?) and an ENTIRE GODDAMN LOAF of French Bread. It’s the perfect storm of savory and HOLYSHITI’MGOINGTODIE!

This meatloaf is extreme only in the sense that your idea of living on the edge is early onset congestive heart failure with a side of exploding bowel syndrome.

This is your heart on Extreme Meatloaf, any questions?

As you can see, meatloaf is apparently only EXTREME if you make it: a) boring as hell, b) packed with grease, c) with seafood seasoning and goddamn turkey, or d) by dumping everything you have left over in the fridge into a loaf pan.

Perhaps meatloaf is the wrong vehicle for culinary experimentation. Or perhaps, we’re just a bunch of squares.