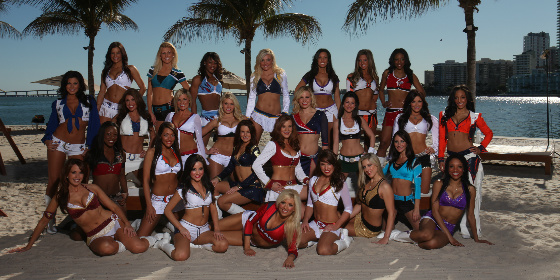 The 2012 NFL season started last night with the Dallas Cowboys defeating the New York Giants 24-17. To celebrate another year of pro pigskin we’ve compiled a list of 32 (or more) facts and a few opinions about this NFL season, one for each team.

The Dallas Cowboys are 1-7 in their last eight playoff games.

Michael Vick has started 16 games one time in his eight-year career. He has never started more than 13 games since coming to the Eagles. His backups are Nick Foles, who has never thrown a regular season pass and Trent Edwards, who is Trent Edwards.

The results of the Redskins‘ last home game before election day has predicted 18 of the last 19 presidential elections, with a loss signifying a party change in the White House. The Redskins should be awful this year, but lucky for the Obama campaign they host similarly awful Carolina two days before the November 6th election. 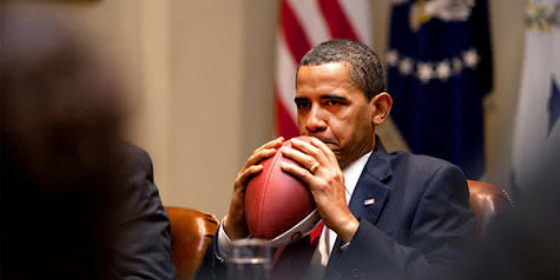 Sports Illustrated loves the New York Jets QBs, putting them on a total of 10 covers combined. Greg McElroy has been on none of them.

The Bills were 4-2 when they signed QB Ryan Fitzpatrick to a six-year, $59 million contract during their bye week in 2011. They proceeded to go 2-8 the remainder of the season, including 0-5 on the road.

The Patriots signed their two tight ends, Rob Gronkowski and Aaron Hernandez, to contracts totaling over $96m. They haven’t committed to starting wide receiver Wes Welker, who will play this year for $9.5M. The top three running backs on the team have contracts totaling $8.49M.

Miami will be one of five teams starting the season with a rookie QB under center with Ryan Tannehill winning the job out of camp. His targets at WR this year will be Davone Bess (51 receptions in 2011), Anthony Armstrong (7), Brian Hartline (35), Rishard Matthews (0, rookie), Marlon Moore (0) and Legadu Naanee (44). On the plus side for Tannehill, his wife Lauren was the breakout star of this year’s Hard Knocks on HBO. 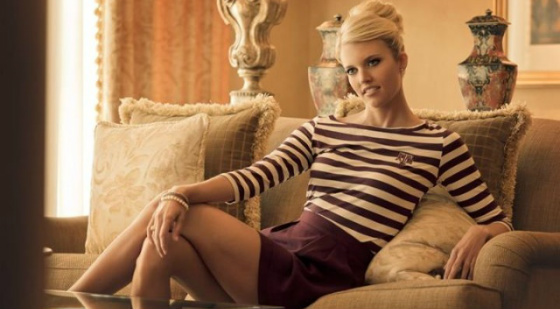 Carolina Panthers QB Cam Newton posted one of the best rookie seasons in NFL history, throwing for over 4000 yards and 21 touchdowns in his first campaign. The problem is those numbers were inflated by the first four games of the season. Newton failed to break 300 yards passing after the fourth game of the season and only broke 250 yards twice in the second half of the season. With few additions to the offense the question is which half of the season is closer to the real Newton.

The Atlanta Falcons are 0-3 in the playoffs since the drafting of Matt Ryan and the hiring of coach Mike Smith. To try to fix this the Falcons hired new offensive coordinator Dirk Koetter. Koetter last worked in Jacksonville, where his offenses ranked an average of 24th over his last four years on the job.

The New Orleans Saints gave away only five fumbles in 2011, tied for the best in the league, while Drew Brees threw 14 interceptions. Combined with only 16 takeaways it left the Saints as the only NFC playoff team with a negative turnover differential in 2011. They were knocked out of the playoffs by San Francisco after giving away five turnovers in a 36-32 loss. The Saints failed to add a player with a history of creating turnovers.

With the release of Chris Redman, Tampa Bay Buccaneers backup Dan Orlovsky is the only active QB in the NFL from a Big East school. That number jumps to four if you include the six 2013 additions to the conference. 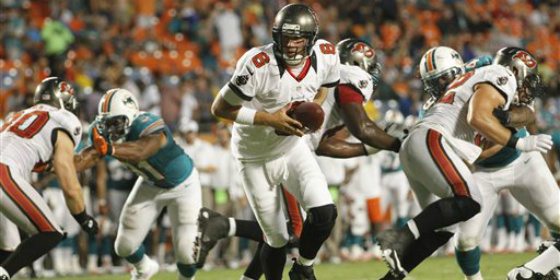 The Houston Texans season rides on an outstanding rushing attack and the arm of Matt Schaub, whose late season injury likely cost the Texans a playoff win over the Ravens and a trip to the AFC Championship game. That is an issue that is likely to repeat, as the Texans rush-friendly undersized linemen aren’t built for sustained pass protection, forcing Schaub to miss 16 games during his five-year tenure in Houston.

Jake Locker of the Titans is likely the second best QB in his division for 2012. This is not a compliment.

The three QBs on the Colts roster have combined to throw for 1,158 yards in the NFL. All 1,158 are by 6th year veteran Drew Stanton.

Jacksonville’s Jaguars Blaine Gabbert attempted 55 more passes in 2011 than the other projected AFC South starters combined. He only completed 50.8% of them.

The Lions rushed for the fourth fewest yards in 2011. Their biggest backfield addition is Mikel Leshoure, a second-round pick in 2011 who missed last season with an Achilles injury. Leshoure is suspended for the first two games of the season. Nominal starter Jahvid Best is out indefinitely with lingering concussion effects and Kevin Smith is remarkably mediocre at running the football. Detroit is the only non-expansion team that has never appeared in a Super Bowl.

Green Bay accumulated 6,848 yards of total offense last year, 5,161 of them through the air while going 15-1. Unfortunately they gave up 6,585 yards last year and were the worst pass defense in the league. The Packers used their first six draft picks, including three in the first two rounds, to select defensive players.

The Bears were a playoff contender at 7-3 before injuries to Jay Cutler and Matt Forte doomed them to finishing .500. Keeping Cutler and Forte healthy is a priority if the Bears want to make the playoffs in the competitive NFC North. J’Marcus Webb, the starting left tackle who is crucial to this effort, is slow off the line and likely to get Cutler killed this season.

The Minnesota Vikings were very bad at winning games in 2011, going 3-13. They were also bad at losing games, winning a meaningless week 16 matchup with the Redskins that cost them the opportunity to draft Andrew Luck or RGIII. In that same game star RB Adrian Peterson suffered a knee injury that is likely to slow him in 2012. 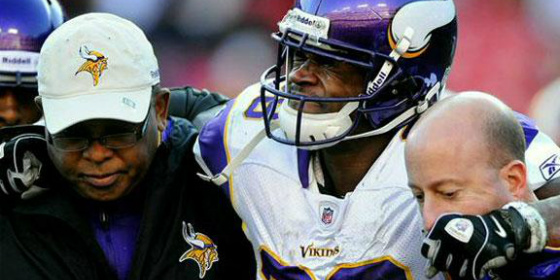 Cleveland has made the playoffs once in the 13 years since they returned to the NFL. The Browns will be starting a 28- year-old rookie quarterback, a running back coming off a preseason knee injury and travel to Cincinnati, Baltimore and the New York Giants in the first five weeks of the season. Expect that streak to continue.

Baltimore Ravens QB Joe Flacco and RB Ray Rice, drafted in 2008, have played in 54 straight games together (including the playoffs). Flacco hasn’t missed a game in his four-year career while Rice has only missed three since his first season. 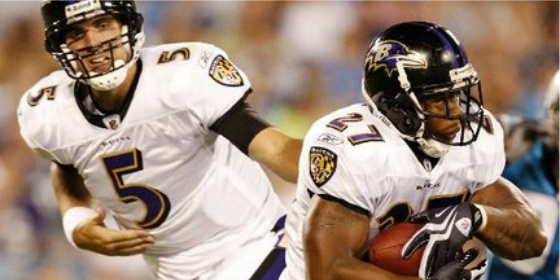 The 49ers won a surprising 13 games for new coach Jim Harbaugh in 2011 and made it to the NFC Championship game.  They did it thanks to a tough run defense (repeatable), an easy schedule in the abysmal NFC West (repeatable) and a +28 turnover margin. Only one other team (the 2010 Patriots) had a turnover margin that good, and they didn’t have Alex Smith under center.

Sam Bradford and his awful rookie contract are still looking to break out for the St. Louis Rams. The effort is complicated by a lack of experience by his targets, as the nine wide receivers and tight ends on the depth chart combined for 1,357 receiving yards in 2011, slightly less than Carolina’s Steve Smith.

Ex-Packers backup QB Matt Flynn signed a three-year, $19.5M contract with the Seattle Seahawks after a 480-yard passing performance in a week 17 cameo last year. He will be starting the 2012 season on the bench after getting beat out for the job by 2012 third-round pick Russell Wilson. Wilson hit .229 over 376 at bats in the Rockies minor league system.

The Arizona Cardinals envy the Flynn signing, as their current backup QB Kevin Kolb is working on a $65M contract signed before last season. Unlike the Seahawks, they had to trade a second- round draft pick and a starting CB for the privilege. 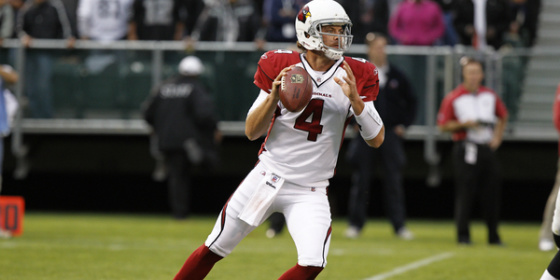 Denver rode Tim Tebow to a playoff victory over the Pittsburgh Steelers last year, then dumped him for Peyton Manning. If Manning struggles coming back from neck surgery expect Broncos fans to express their displeasure with signs, banners and billboards.  Thankfully, Manning won’t see them if they are to his left.

Kansas City fired abrasive coach Todd Haley after a disappointing 2011 season. His departure alone might make the Chiefs the favorite in the middling AFC West. If 2011 top pick Jonathan Baldwin can stay out of the new coach’s doghouse (and out of locker room fights) he might provide the deep threat opposite Dwayne Bowe the Chiefs needed badly last year.

We know this about Oakland, the Raiders are unlikely to be trading any high picks away for an aging quarterback this year, mainly because they don’t have any picks left. After the awful trade for Carson Palmer turned out decently for the Raiders last year, expect them to ride him as long as possible while slowly rebuilding through first draft picks. 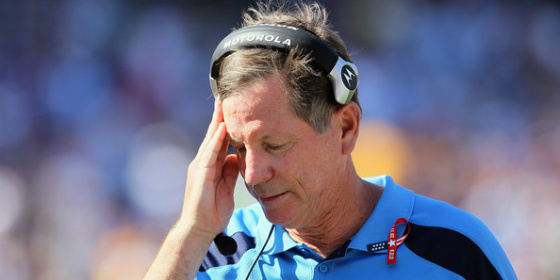