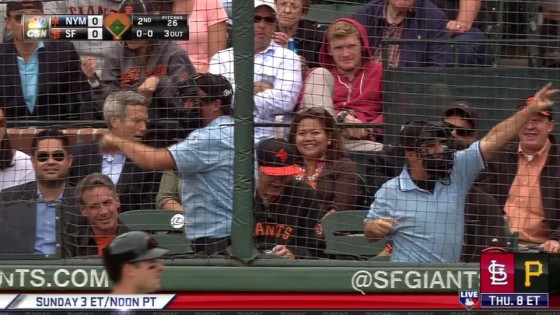 There are a pair of fake umpires having fun behind the plate at AT&T Park in San Francisco for the afternoon game between the Mets and Giants today. It’s nice to see some love for the umpires, because they need fans too! We captured a bit of video featuring these fake umpires from the broadcast, but they’re right behind the plate and present in nearly every shot, making every call right alongside the real umpire. Once you know fake umps are there, they are impossible to ignore.

After being noticed by the broadcast team, the team’s social media folks even had the fake umps pose for a photo.

Here they are on the Mets broadcast :

Your browser does not support iframes.

We’re not sure if these are the same fake umps that were spotted at a Giants vs. Blue Jays game in Toronto back in 2010. Check out that classic video below :

Your browser does not support iframes.

They don’t look like the same guys, but it’s been five years, so maybe they’ve aged and lost some weight. We’ll soon find out if these are the same two gentleman, back on the road for a good cause, or just another pair looking to have some fun. Either way, we love it when they ring up hitters in unison.